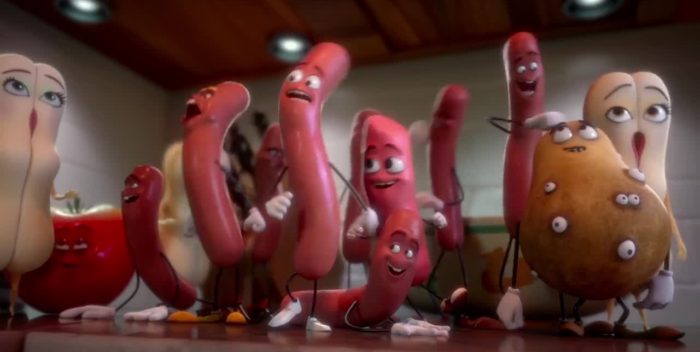 Seth Rogen and Evan Goldberg get it completely weirdly otherworldly right with their singularly unique brilliantly funny, dumb and always clever the R rated animated Sony’s “Sausage Party.”  They put it all in, (yes including kitchen sinks) and wisely stay in their ambitious lane, run their own otherworldly artistic race and win hands down.

Rogen adeptly weaves in his trademark homage to stoners everywhere, combined with slasher/horror and over the top orgy humor.  Plus, his inherent sweetness dribbles through all his glorious, eccentric characters. The story centers on Frank (Rogen), a packaged sausage, and his neighbor, s hot dog bun Brenda (Kristen Wiig).  All their foodie friends think they are being chosen by the humans to go to the coveted ‘Promised Land.’  But when they realize that life outside their supermarket is nothing to wish for, they want to make sure that their pals, including a hilarious Salma Hayek as Theresa the Lesbian Taco, Paul Rudd, Craig Robinson, Jonah Hill and many more, are all saved from the dreaded human consumption.

Rogen, along with his co-writer and longtime partner Evan Goldberg, have said that for years they have wanted to make this film.  How right they were.  The film surprises you because apart from being hysterically jaw dropping funny, its’ ideologies and themes throughout are somehow inexplicably meaningful.  All this is why “Sausage Party” is so brilliant, a true massive cult film for the ages.