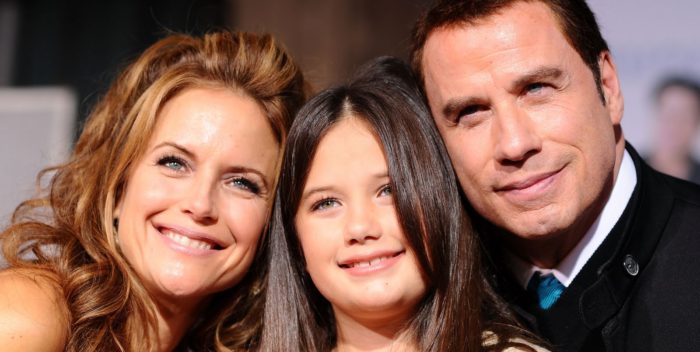 Since Scientology is a lot like the Mafia, I guess all this makes sense: Ella Bleu Travolta is playing John Gotti’s eldest daughter, Angel, in the not very promising movie being shot now in Cincinnatti, Ohio.

The movie is “The Life and Death of John Gotti.” This is the long, long, long in the making project produced by ex con Marc Fiore, now with Emmet/Furla Productions, and directed by “Entourage” star Kevin Connolly. John Travolta plays John Gotti, Sr. Kelly Preston plays the Don’s wife.

Now Ella, who’s 16 and has only acted once before in a small role in “Old Dogs” (2009), has joined the cast. Travolta and Preston are part of a cult, but they’re good actors. And Travolta’s sister, Ellen, used to get a lot of work. So did his brother Joey.

Plus Kelly once lived with Charlie Sheen until he accidentally shot her. So Ella may have inherited those genes. (Also, don’t forget, everyone laughed at Sofia Coppola in “The Godfather Part III,” and who’s laughing now?) Kelly Preston also played a convincing bitch in “Jerry Maguire.” Remember that?

The “Gotti” movie looks horrible, but you never know. Stacy Keach, a serious actor, is in it. The cast is largely a budget group, with Pruitt Taylor Vince the only other vaguely recognizable name. John Gotti Jr. is played by relative newcomer Spencer Lofranco. The movie also has a whopping 24 producer credits. The Academy only lets three producers on stage to win an Oscar, but that probably won’t be an issue here.

Anyway, it’s always fun to read the history of this movie. Connolly will be fine no matter what happens. The worst that happens, this is his “Glitter.”