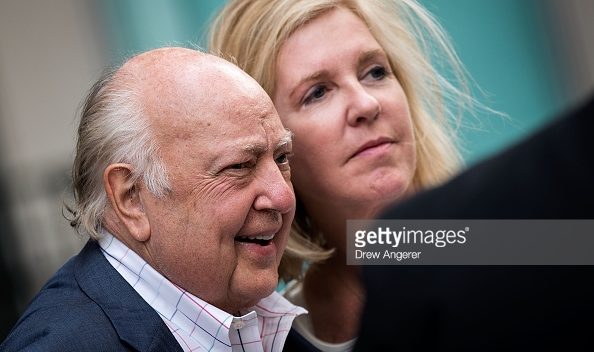 Michael’s on a Wednesday in the summer? Who’ll be there? Anyone?

Oh yeah. Best table in the house, front right corner by the window: former Fox News chief Roger Ailes, disgraced after his ouster over sexual harassment allegations from a variety of women, and a lawsuit from former anchor Gretchen Carlson.

But hey–that’s how you declare you’re still alive. Ailes, ever the strategist, dined with a woman who still likes him– his wife, Elizabeth Tilson, looking very “Mad Men” in a creamy white dress and bouffantish hairdo. Ailes was dressed in a grey suit. They looked like they could have been waiting for Don Draper and Roger Sterling.

My lunch companion was the estimable David Schulhof, an old friend from Miramax who now runs the music part of Stuart Ford’s IM Global. Stuart’s another ex-Maxer, and as with almost all alumni from the heyday of “Shakespeare in Love” and “Good Will Hunting,” very successful. They finance a lot of movies and TV projects.

If you’d drawn a diagonal line from the Ailes table through ours, you would have hit tabloid journalist and professional Michael Jackson mud-thrower Diane Dimond. We didn’t speak, naturally, and I was brave enough to sit with my back to her. Luckily man about town Euan Rellie was catty-cornered between us just in case knife throwing occurred.

Yes, you could have called this meal “No One Here Gets Out Alive.” It was a rare moment, too, because owner Michael McCarty and host Steve Millington were each on the floor, the whole staff was in, the iced tea cubes were crackling and the cobb salads were flying. I thought I’d wandered into “Game of Thrones.” or “High Noon.”

Across from our table sat attorney Alan Mnuchin, whose brother Steven is the head of finance for the Trump campaign, whatever that means. At the table to my left, Jeanine Pirro, former US district attorney, and Fox News commentator. She did not say hello to Ailes.

“Were you harassed?” I asked, to which she shook her head no and left. Could be I was harassing her. She was too kind to say.

Into the fray: Julian Niccolini, owner of the now closed Four Seasons restaurant. He shook hands with everyone. He has no place to go at lunch for the first time in 40 years. “He was here last week, too,” an observer said. Also spotted: another former Fox Newshound Bill McCuddy, as well as NY Social Diary stalwart David Patrick Columbia and Jimmy Finkelstein, owner of TheHill.com, who you thought would have been in Philadelphia for the Democratic Convention since The Hill covers politics. (This would be like the editor of Variety going to Pittsburgh during Oscar week.)

Celebrities helped cut the tension in the room: At the vacant table along the wall next to the Aileses came Oscar winner Sir Michael Caine and his long time agent and friend the legendary Boaty Boatwright of ICM. Whew! Across from the them arrived Kathie Lee Gifford, looking like springtime, with an older lady friend who was channeling the late Carrie Donovan.

Program note: It was pretty loud in a room where almost no one was speaking to each other.

And to think, most days I work through lunch with salad from Lennys!