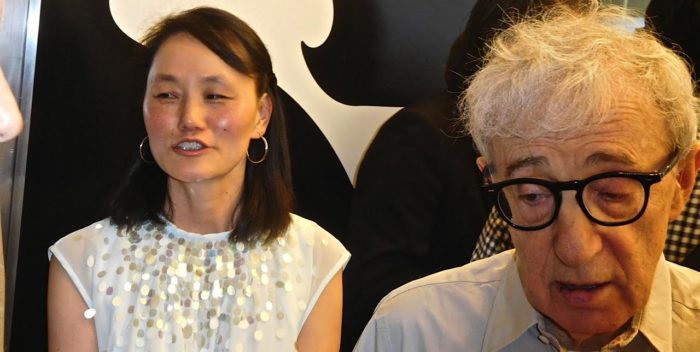 Woody Allen was chatty on the red carpet at the New York premiere of “Cafe Society,” at the Paris Theater Wednesday night. His wife Soon Yi smiled broadly as she stood to the side while he spoke to the press. A nostalgic, bittersweet ode to 1930’s Hollywood, “Cafe Society” is pretty much stolen by Kristen Stewart.

In a chameleon role, Stewart’s character goes from a down-to-earth, fragile Nebraska gal finding her way around Tinseltown to a glamorous but jaded Hollywood insider who’s lost her way.

On the red carpet, complimented on the complexity and depth of his female characters, the writer-director and narrator of the film replied, “I identify with the women I write. I identify with Kristen Stewart’s character,” he said.

Allen went on to compliment his leading lady and noted how challenging her role is. “Some women can play one and not the other.”

At the sweaty, overcrowded non-air conditioned party at the Carlyle (which Woody and Soon Yi had the good sense to leave quickly): a “Sopranos” reunion of Michael Imperioli (Christopher) and Tony Sirico (Paulie Walnuts), plus Tony winning writer-director Doug McGrath (he co-wrote “Bullets Over Broadway” and has a cameo in “Cafe Society”), actress Carol Kane, Patti Smith, and Richard Kind.