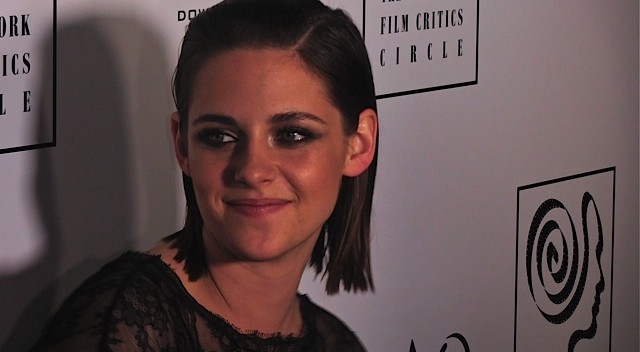 It’s no secret that Woody Allen films actresses better than anyone. Maybe that’s why his actresses have scored so many Oscar wins and nominations. From Diane Keaton to Dianne Wiest to Mira Sorvino to Cate Blanchett, with many others in between, Woody is the go to guy if the ladies want a gold statue.

So it should come as no surprise that Kristen Stewart hijacks Woody’s excellent, funny and profound “Cafe Society.” She steals out from under Jessie Eisenberg, Steve Carell, Parker Posey and a whole cast of talented folks.

Kristen came to Woody’s premiere last night at the Paris Theater, followed by the overcrowded and hot as a sauna reception at the famed Hotel Carlyle. Woody came in for a few minutes, sensed the heat, noise and general unpleasantness, and scrammed tout suite.

But Kristen hung in there, chatting with legendary rocker Patti Smith and her daughter, taking pictures with young girls who are really “Twilight” fans, and even with Woody and Soon Yi’s very poised 16 year old daughter, Manzie, who brought two school pals.

Kristen told me about the short film she’s going to direct this summer called “Water.” “It’s about heartbreak,” she said, “what it looks like what we’re going through it and what’s it like when you realize you’ve recovered.” She’s cast a non actor friend named Josh as the lead.

Kristen was completely psyched as she described this to me. She confirmed that she has bigger aspirations to become a feature director. “Since I’m 9 I’ve wanted to be a director,” she said. I’ll tell you–she can do it. Why? She already knew what I was going to say. “Because I want it,” she said. I think we’re just at the beginning of a learning curve with Kristen Stewart. She has a most unusual career ahead of her.

In Cannes, Kristen starred in both “Cafe Society” and “Personal Shopper.” She left an indelible impression as a serious actress. She’s also a knock out in both films. Her “Twilight” time is behind her. “You don’t know how much that means to me when you say it,” she told me.