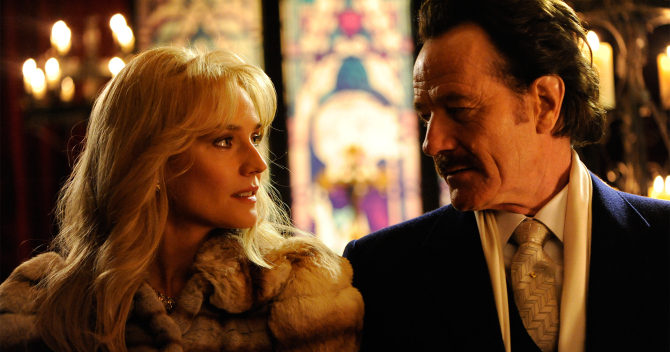 Bryan Cranston just has ‘it’. This now iconic character actor commands attention in whatever role he plays. In Broad Green Picture’s “The Infiltrator,” written by Ellen Brown Furman and directed by her son, Brad Furman, Cranston is first rate. Based on a true story about U.S. Customs agent Robert, “Bob” Mazur, who was the key Federal agent to go undercover and hit the Colombian drug cartel in the 1980’s, with the infamous Pablo Escobar being one of the main targets, and striking them where it hurt most, tracking their money laundering operation and busting it and all the players involved.

Ultimately it didn’t directly take Escobar down, but it did put a major stop to his operation and shut down the less then pristine, BCCI, then the world’s seventh largest privately held bank. Cranston takes us along for the ride of the Operation C-Chase, the federal fight against money laundering and cocaine smuggling, along with the worldwide criminal conspiracy.

Mazur and his loyal partner, Emir Abreu, played by John Leguizamo, who is equal to Cranston’s talent, spent five treacherous years pretending to be financial wizard/fixers who showed that they were able to move money across international lines without the interference of the pesky US government. Ironically they were conning and at the same time earning the confidence of the nefarious drug dealers and the crooked bankers, all the while secretly recording them and gathering mounds of evidence.

The men live a roller coaster ride, living large in order to impress the criminals, while perpetually being put in dangerous and oftentimes life threatening situations. Cranston shows you every step of the way, his love for what he does, how it feeds a part of him that he’s not necessarily accepting of.

Married in real life, and his wife is played sweetly by Juliet Aubrey with two children, Mazur lives a double life by being engaged, which he had to be as he did not want to have sex with a hooker with his druggie pals, so he told them he was engaged. Enter his agent fiancé, a luminous Diane Kruger, who is a “virgin” undercover agent. The chemistry between them is complicated and close, and both are excellent at showing their feelings while navigating their chaste, but intimate relationship. Benjamin Bratt turns in a wonderful performance as Roberto Alcaino, a drug dealer with a heart whom Mazur literally feels guilty betraying. Amy Adams as Mazur’s prickly boss Bonnie and the shining Olympia Dukakis eating up the scenery as Mazur’s fake over the top Auntie, are all terrific as well.

The film is a mixture of the harrowing story of Operation DC and the drama of the real characters and what they went through to do their job. Well worth it to see this fascinating and fast moving tale of a real life crime saga.