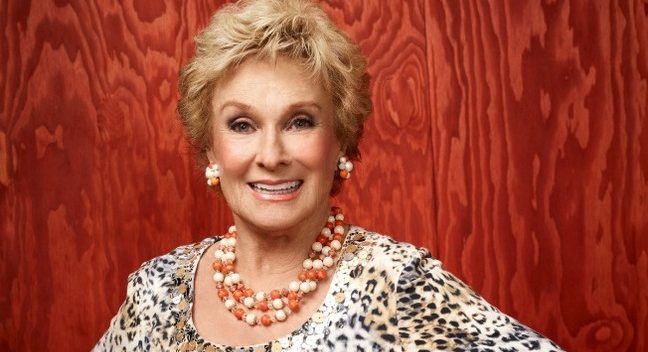 Cloris Leachman, 90, Oscar winner and eight time Emmy winner, sure does not hold back.  She’s as salty and honest as ever.  At the recent Women in Film Legacy Film Series, “Tales From The Trenches,” presented at the Ebell in Los Angeles, mega talented Cloris was the subject of the film which was produced by Emmy Award winning producer Ilene Kahn Power, a former longtime HBO Exec ( “Gia,” Elvis” and more) and directed by award winning Linda Feferman.

Cloris held nothing back, including who she slept with back in the day. When talking about her fellow actors and friends she exclaimed, “I remembering those I didn’t “bleep“:  Marlon Brando, I didn’t,  Paul Newman I didn’t. Sean Connery I didn’t.  But there was one I did.” Then she laughed and didn’t say.

I asked her after the screening how it felt to be so beloved. Cloris answered, “Well it’s a turnabout.  I’m here; you’re there, I’m doing work that people love.  Then they tell me about how much they love it.  What could be better?“

Does she ever speak to her “Mary Tyler Moore”co-stars?  She replied, “I never talk to Mary, she’s back east.  We hug if we meet so nothing bad, but she’s far away.  Valerie and I talk and see.”  What about her ex-husband George Englund — with whom she had a 26-year marriage that produced five children, which wasn’t always easy but to whom she’s still devoted.  She answered, “George is 90 also, we’re not married but still love each other. I’m going to see him this weekend.”

Joan Collins famously had an affair with George while he and Cloris were still married. Cloris said: “I liked her back then, we were friends.  Not friends anymore.  I think she’s embarrassed to be friends with me. After all I was with George when they had the affair.  Such is life.”

Her devoted daughter Dinah told me, “My mother and father are soul mates who can’t live in this physical plane together.”

Cloris doesn’t stop working. Always in demand. She’s in the middle of shooting “American Gods” for Starz and she just wrapped up her next project, a film with Robert DeNiro and directed by Taylor Hackford called “The Comedian.“ “I can’t tell you a damn thing about it,” she told me, “I couldn’t even take a picture on the set. But it was a love fest between us, that’s for sure.”

Speaking about love fests  I couldn’t help but ask her daughter if she would ask her mother who was the mystery man that Cloris had an affair with?  Dinah came back and quite matter of factly said to me, “My Mom said she slept with Gene Hackman, and you can write that!” (Leachman did write all about it in her 2009 autobiography — a one night stand in San Francisco.)

Producer Ilene Kahn Power then summed up Cloris’s singularly unique talents.  “Her ability to be a great dramatic actress and an equally great comedienne is astonishing. From “The Last Picture Show” to “Young Frankenstein’s” Frau Blucher with the mole on her face, and everything else she has done and continues to do. She has the best sense of humor, she’s truly lovely and vibrant and part of our Hollywood history.  Every time I see that scene, “he vas my boyfriend,” I collapse.”  Watch that classic scene now: