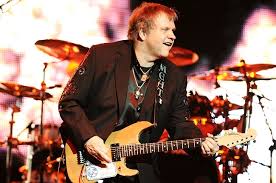 The 1970s King of Bombast, Meat Loaf, or as the New York Times called him “Mr. Loaf,” does not go away. He’s still looking for Paradise by the Dashboard Light.

Mr. Loaf and his composer, Jim Steinman, have a new album coming September 16th on 429/Savoy Records. It’s called “Braver Than We Are” and features a reunion of Ellen Foley and Karla DeVito, who sang on the original “Paradise” hit.

Steinman, of course, is also known for writing Bonnie Tyler’s great hit “Total Eclipse of the Heart” and Celine Dion’s “It’s All Coming Back to Me Now.” Meat Loaf is also famous for having been in the “Rocky Horror Picture Show.”