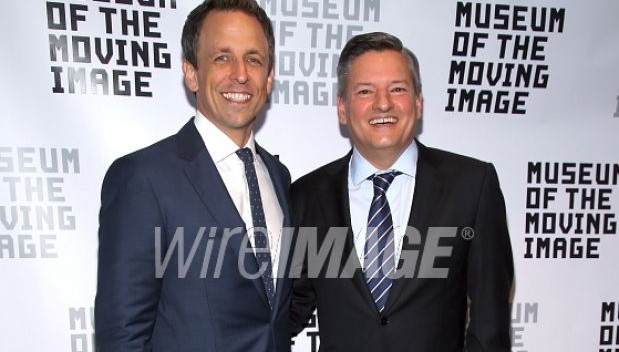 Jeff Garlin of ABC’s “The Goldbergs” and HBO’s “Curb Your Enthusiasm” fame was just one of the celeb guests Monday night when the Museum of the Moving Image toasted NBC’s Seth Meyers and Netflix chief Ted Sarandos. I’ve been to dozens of events for the Museum over the years, and this had to be the best. Garlin did his stand up comedy routine and ‘killed’– he was Don Rickles level, side splitting old fashioned funny, using Meyers and good natured guest Ashton Kutcher as his foils, and he was sublime. I wish someone had taped it, it was that good.

Garlin did tell me after the show a couple of things about the recently announced 9th season of “Curb.” “It won’t start until after the new year,” he said. “Larry’s writing it now.” He also told me he has no idea who will be in it. “I’m not even signed for it,” he said, adding, “But I know I’ll be back.” Garlin has a clause in his “Goldbergs” contract that allows him to continue with “Curb” no matter what.

The annual dinner at the St. Regis Hotel small ballroom turned out to be a lot of laughs. For once the opening comic, this time Michelle Wolfe, was laugh out loud funny. And the shtick from the presenters– including Kutcher, who has a new show coming on Netflix, and Uzo Aduba, star of Netflix’s “Orange is the New Black,” was sensational.

Meantime, there were two TV show reunions in the room– Carol Kane of “Unbreakable Kimmy Schmidt” brought Tony Danza as her date– hence a “Taxi” reunion. And Laura Prepon, who came late (she’s on “Orange”) reunited with “That 70s Show” buddy Kutcher. There were also terrific speeches from CNN’s Jake Tapper and Sony Pictures Classics’ Michael Barker, who is the current co-chair of the museum.

There was a moment of silence for the Orlando victims, and Sarandos — who’s revolutionized TV with shows like “Orange,” “House of Cards,” “Grace & Frankie” — talked about Anton Yelchin, who died tragically yesterday. (Yelchin was working on Netflix’s “Trollhunter” animated series.)

But it was otherwise an upbeat evening and I got to hang with one of my favorite people, Nicole Avant, aka Mrs. Sarandos, daughter of famed Hollywood exec Clarence Avant, and a major West Coast Democratic supporter. She also has a whole family of characters named for her on CBS’s “Bold and the Beautiful.” How’s that for famous? I also met Charlie Cox (he plays Daredevil on Netflix but is off Broadway right now), and obsessed over the very cute Lea Delaria (among the many “Orange” cast who showed up).

Meyers, by the way, noted the absence of his friend and producer Lorne Michaels, who received the MMI Award several years ago. “But I’m younger now than he was when he got his,” Meyers cracked. “So now I can always say, you were how old when they finally gave that to you?”

PS Jeff Garlin joked that he’s never been invited on Seth’s late night show, which got a lot of laughs. But they made a date for next January, when Garlin’s Netflix series, “Handsome,” debuts.