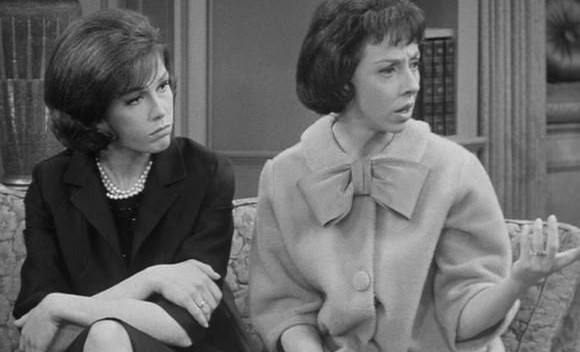 The great comic actress Ann Morgan Guilbert has died at age 87. She played Millie Helper, wife of Jerry, on “The Dick van Dyke Show” from 1961 to 1966– most of the 61 episodes. The Helpers were next door neighbors in New Rochelle to Rob and Laura Petrie (Van Dyke and Mary Tyler Moore). Millie was to Laura as Ethel once was to Lucy.

Guilbert never stopped working after that, appearing in countless TV shows.  But her big second run came in 1999, when she played Fran Drescher’s grandmother Yetta in “The Nanny” for many episodes. She also appeared memorably in two episodes of “Seinfeld” as Evelyn, the elder Seinfelds’ friend in Boca Vista, Florida, alongside Sandy Baron.

In 2010, Guilbert finally got her movie gold when she played the grandmother in Nicole Holofcener’s excellent comedy, “Please Give,” opposite Catherine Keener and Oliver Platt. Guilbert was one of those great veteran actors whose career spanned a lifetime in Hollywood. The only award she ever received was a cast member of “Please Give” when the film won the Robert Altman Award at the Independent Spirit Awards. But her  work lives on forever.