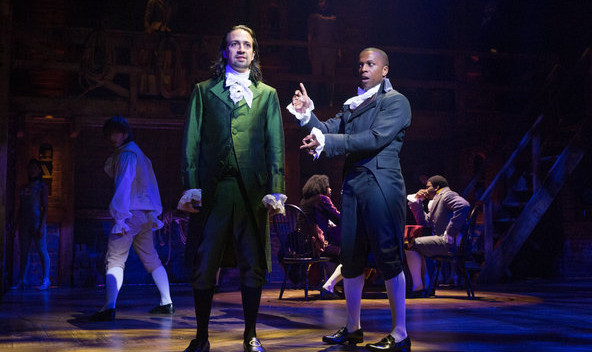 The score to Broadway show “Hamilton” is now number 1 on both iTunes and Amazon.com. The Tony winner is setting a record for best selling ever Broadway show CD and download.

It’s also huge on Spotify. The title track has already been streamed over 10 million times. The unofficial count for the number of times the top 10 “Hamilton” tracks hovers around 75 million.

I can’t think of another Broadway show with a CD so popular in recent history, not “Beautiful” or “Rent” or just about anything else.

It’s funny, too, because after all the hype last year about “Hamilton” being rap or hip hop, it actually sounds like a very mainstream pop R&B album when you listen to it at home, far from the stage. That’s the beauty of it. As I wrote last summer from the opening at the Public Theater, “Hamilton” is full of hooks and melodies. And it’s all original. Nothing is sampled.

Now all “Hamilton” is missing is a hit single. I’d suggest “Helpless.” But not having a single means that fans are buying the whole album all the time, and not cherry picking different songs. They want the whole experience.

One more plus from the “Hamilton”mania: Tony winning star Leslie Odom Jr’s self titled album on S-Curve Records has risen to number 10 on iTunes where it’s exclusive until June 24th. On Amazon, where you can buy the physical CD then, Odom’s album (he won Best Actor in a Musical) is number 30 just from pent up demand.