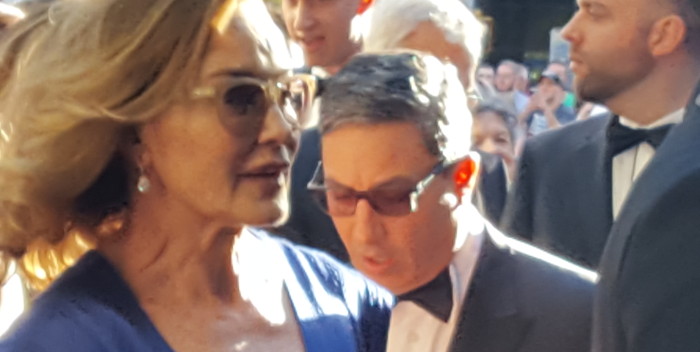 Someone’s going to have to get a spoken word recording for Jessica Lange. That’s the only way she’ll get a Grammy, she tells me. “It won’t be from my singing!” she declared with a laugh. Lange is looking for an EGOT– Emmy, Grammy, Oscar, Tony. Last night she filled in the “T” with a Tony for “Long Day’s Journey into Night.” But that elusive Grammy– maybe she can recite poetry or better yet Eugene O’Neill– since that’s what she won Tony for.

Meanwhile, there are only 14 more performances of “Long Day’s Journey” and Lange’s co-star Gabriel Byrne tells me this may be the end of his days with Eugene O’Neill even though he’s sort of perfect for the playwright’s work. “It’s too tiring,” he told me. “I think this may be it.” I hope not.

And so it went at the Beacon Theater, which is sort of the best locale ever for the Tony Awards, much more intimate than Radio City Music Hall. There’s literally no backstage area, so much of the waiting to go on stage takes place in the actual small lobby– that’s where I continually ran into host James Corden, or members of “Hamilton” or “The Color Purple” as they prepared to go on stage. Crazy but fun! 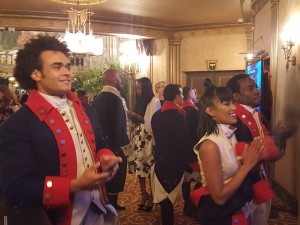 People having the most fun around the little bar or just getting some air were the great Michelle Williams and her TV actress pal, the very funny Busy Phillips, Harvey Weinstein, actor Michael Shannon, Alex Sharp (Tony winner for “Curious Incident of the Dog in the Night”) and so on. The convivial crowd could watch the show inside the theater on a couple of wide screen TVs. Several times Corden– who is already back in Los Angeles to tape his late night show tonight– came by and asked, “Is it ok? Am I all right?” He was, more than ever!

Despite the tragedy in Orlando and stepped up security, the Tonys had a fun, mellow feel. (Mike Zimet’s security force made everyone feel very safe.) Very different than a Los Angeles awards show, that’s for sure 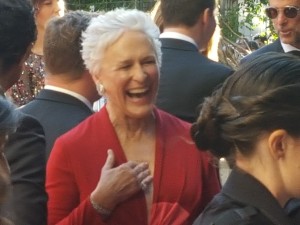 On the red carpet, the Broadway community mixed and mingled. I got this great show of Glenn Close (who came to the show just to play Hillary Clinton in a hill-arious sketch). You can see her laughing here (Sir Andrew Lloyd Webber, her composer for “Sunset Boulevard” is just beyond her.)

Best line of the night– Steve Martin, after losing in every category for his musical “Bright Star.” “We swept the Tonys!” He sliced his hand through the air. “Nothing!”