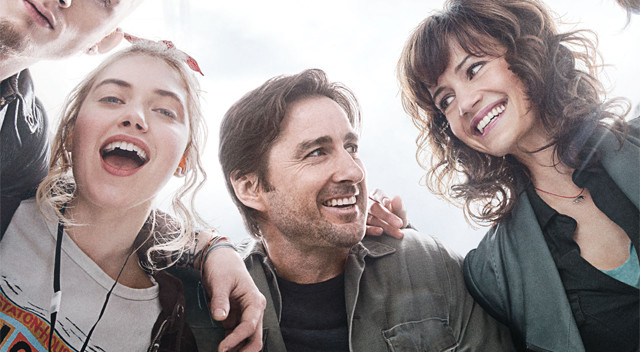 Last night, the Ace hotel was by far the coolest place to be in LA. Why? Because Showtime was premiering Cameron Crowe’s new drama series “Roadies.” What premiere has the ushers coming down the aisles with mini bottles of George Clooney’s Casamigos Tequila? This one did and it was rock and roll all night.

“Roadies” certainly has an impressive pedigree, besides Crowe, J.J. Abrams is an Executive Producer and the writer Winnie Holzman (Wicked, My So Called Life) is an EP as well as a writer on the show. Abrams explained the genesis of the show to the energetic crowd.

“I hope you are all liquored up,” he quipped and then continued, “I’ve been a friend and a fan of Cameron’s for a long time. About a decade ago, I begged him to write a pilot. I was tenacious about it and broke him down.”

Mingling with the cast was none other than music titan manager Irving Azoff, who is one of the consultants on the show. Irving, who is known never to mince words, told me that show was,  “Amazing, simply terrific. Cameron is just brilliant. Happy to be a part of this.” Azoff’s wife, the powerhouse Shelli, was with him and it’s not just a coincidence that Carla Gugino’s character, the tough lady of the road tour, is also smartly named Shelli.

Luke Wilson who plays the tour manager Jack Harris told me: “I love playing him. Man, I hope the show plays and people get it.” His pal actor Dash Mihok, who brilliantly plays the troubled brother Bunchy to Liev Schreiber’s Ray Donovan, also a hit for Showtime said, “it’s going to play, and play real well.”

(Speaking about Dash, why hasn’t he, or the equally talented Eddie Marson, who plays Ray’s other challenged brother Terry, received any Emmy nods? They are overdue and well deserved for both of them.)

After Crowe told Dash how much he was a fan of his work, I spoke with Cameron, who told me “Roadies,” is a career highlight after writing and directing such hits as “Almost Famous” and “Jerry Maguire.”

“Working with this cast and having them there the next morning when you write something the night before and it comes to life immediately, well I’ve never had that kind of instant gratification with actors I love so much.” He added, “Being the rock fan I am, it’s putting your love of music to the test. Telling stories that are all about that passion. Avoiding the stereotypes of making it about a band where somebody OD’s and the travails of stardom. What about the people that put up the equipment? The ripple effect of what happens on stage really changes their lives as they try to make a banquet for you every night. Celebrating the roadies. Bottom line.”

What’s next for him? Cameron said, “More of these I hope. There are not to many stories that you can’t filter through the prism of the road crew. You can write about marriage and all forms of love, devotion and obsession and all that kind of stuff.” I mentioned that all the roadies I’ve met are some of the most laid back, nicest people ever. Cameron agreed. “Yeah, they’re pretty nice. I just went to see The Who. I saw some of the guys who have been with them for 48 years, and they’re still nice. And they’re still rooting for the band. “ Audiences no doubt will root for the terrific “Roadies,” which premieres on June 26th, for a long time to come.