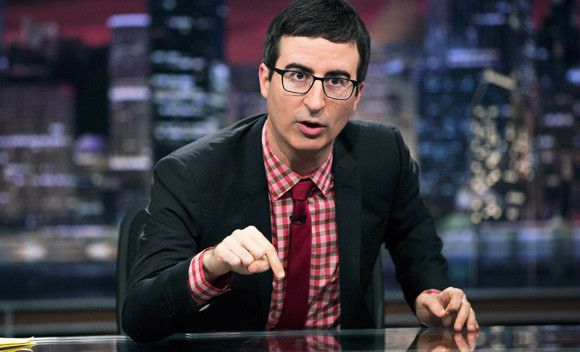 The cabler let their brilliant weekly news star, John Oliver, buy $15 million worth of medical debt from Encore Capital for $60,000. And then Oliver forgave the debt. All those Texans are getting letters saying they no longer owe various medical bills.

Oliver — on fire last night about Trump and other issues– gave a scathing editorial about debt collection companies. He revealed how easy it was for his staff to start their own company, just with a website, which enabled them to solicit offers for bulk debt purchase.

Using the invented name CARP, Oliver bought a package from debt from Encore to prove how slimy the business is– in the files he received social security numbers and other personal information for 9,000 people Encore had been dunning. CARP stands for Central Asset Recovery Professionals — and carp, Oliver pointed out, are bottom feeding fish.

At that point, Oliver could have started dunning the customers himself. Instead, he and HBO turned the whole thing over to a firm that forgives debt without incurring tax fees.

Oliver billed it as the biggest TV giveaway of all time as he was relenting $15 million. But he and HBO had only spent $60,000 to buy it. So really, although he mocked Oprah Winfrey’s old auto giveaways, Oliver’s was a great act of generosity and mischief but maybe really not the biggest giveaway ever.

Still, it proved many points– not the least of which is how easy it is to buy junk.