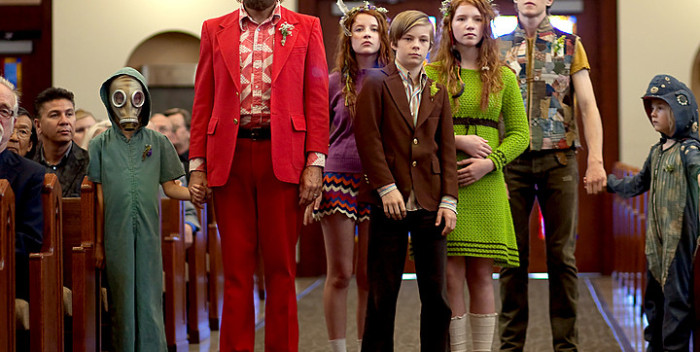 What happens when a film plays Sundance but doesn’t resonate until it hits Cannes? The answer was on display last night in the Salle DeBussy theater as Matt Ross’s “Captain Fantastic” sent a late night premiere crowd into a frenzy of applause, cheers, and standing ovations.

It’s not clear if that was just for the movie or the bravery of cutting edge actor Viggo Mortensen, who displays his full, uh, personality on screen as a kind of survivalist father who takes his family off the grid and into the wilderness of Washington State. His character Ben is the father of six kids including breakout star (like Miles Teller-type) George Mackay, plus a bunch of kids that rival the Partridge Family for beguiling cuteness.

Even though “Captain Fantastic” could maybe be described as the Partridges head for the Mosquito Coast, that would be too simplistic a way to put it. Ross, an actor you would recognize from the HBO series “Big Love” and “Silicon Valley,” grew up in Oregon with an educator mother who eventually took him to socialist school in Britain. Mortensen’s Ben is sort of a stand in for Ross. He’s raising his brood without any modern media, living off the land and in isolation from society.

Unfortunately, Ben’s wife and the mother of the kids hasn’t fared so well in this environment. The daughter of wealthy parents, she’s succumbed to severe depression and suicide. This brings Ben and family to her funeral in New Mexico where the frustrated angry parents (Frank Langella, Ann Dowd) attempt to take control of their grandchildren. That won’t be so easy as Ben has warned them against capitalists, and celebrates Noam Chomsky Day instead of Christmas.

Along the way we meet Ben’s real American middle class sister (Kathryn Hahn), her husband (Steve Zahn) and their two Game Boy playing teenage sons. Of course, in a showdown about values, Ben’s youngest daughter knows more about the Bill of Rights than their older cousins. So it turns out homeschooling is a success.

Mortensen has played hippie types before (memorably in “A Walk on the Moon”) but this film perhaps allows the actor– who’s an artist and a writer himself– to express more of himself than ever before. (Yes, there’s a joke here about letting it all hang out.) With his deeply etched face and soulful eyes, Mortensen is the perfect Lord of these Flies. He makes Ben’s arguments most winning after all.

The enthusiastic audience last night included Orlando Bloom with girlfriend Katy Perry, which turned out to a charming surprise. During onstage introductions of the cast, the smaller kids realized that Will Turner from “Pirates of the Caribbean” and Legolas from “Lord of the Rings” was in their midst and they went, basically, crazy. Later they got to meet Bloom, which I think was more exciting for them than starring in a Cannes premiere!

The kids were not aware, but we were, that Cannes juror Donald Sutherland, and his Lion King mane of white hair, was sitting behind us. Fame is indeed generational.

“Captain Fantastic” isn’t perfect– elements of the ending are a little bumpy– but this is a great film, making the same kind of awards noise as “Whiplash” did two years ago. Sometimes it’s worth waiting through the whole festival to get to the prize at the end.