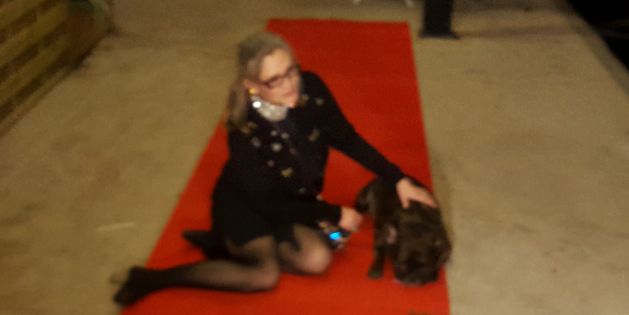 I had the pleasure of running into Carrie Fisher last night in Cannes, as she returned from the big party on Microsoft founder Paul Allen’s 414 foot yacht. She was with her French bulldog, Gary, who has been all over the Croisette this week helping Carrie promote her “Bright Stars” documentary for HBO.

The film is about her and her mom Hollywood legend Debbie Reynolds. The movie has won rave reviews. It airs next year on HBO; I wish it were sooner.

Carrie is here before returning to London for a month or more of work on “Star Wars 8” directed by Rian Johnson. Mark Hamill is in the film, she told me, but Harrison Ford is not as Han Solo “died” in “The Force Awakens.”

“I wish there were some magical way to bring him back,” Carrie said. “Maybe they have some super secret plan that no one knows about!”

As for Gary joining Princess Leia in outer space, Carrie joked: “I asked, but they said he’s too famous!” Maybe they could dress him as a wookie? “No, he needs something special,” she added.

While she’s in London, Carrie will try and finish work on her “Princess Diarist” book due to be published in October. The entries are from the filming of the original “Star Wars.” “You know, they’re very childish, I was 19. But I’m also updating and annotating them.”