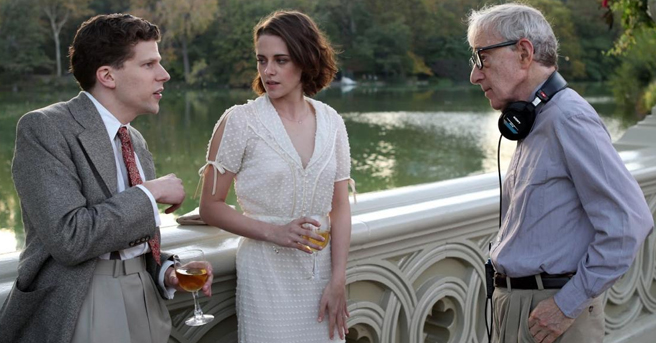 Woody Allen is back in form and better than ever in the very funny bittersweet romantic comedy “Cafe Society.” Jesse Eisenberg, Kristen Stewart and Steve Carell are perfect in the central triangle but all the actors–including some not so famous–are delightful.

This film also looks absolutely gorgeous–like buttah–thanks to Vittorio Storaro’s cinematography and a sumptuous production design. Woody himself narrates the saga of Hollywood vs. New York in the 1930s, and the film is full of Allen’s best laughs, great one liners and essential philosophies.

The press loved it, too–laughing all the way through the screening. There are some hilarious moments. But there are serious ones, too, as Woody described later at the press conference. He attempted to make a movie unfold like a novel– and it worked. The story is in three acts with many quick sidetrips throughout the characters’ stories. It’s a rich screenplay.

PS I see that in the US Ronan Farrow, Woody Allen’s misguided estranged son, has launched an attack on his father through the Hollywood Reporter– a trade magazine run by tabloid people. Shame on him. Manipulated all his life, Farrow waited until Allen had a new movie open to attack him. Why doesn’t he reach out privately and solve his own issues? No one’s buying this stuff.