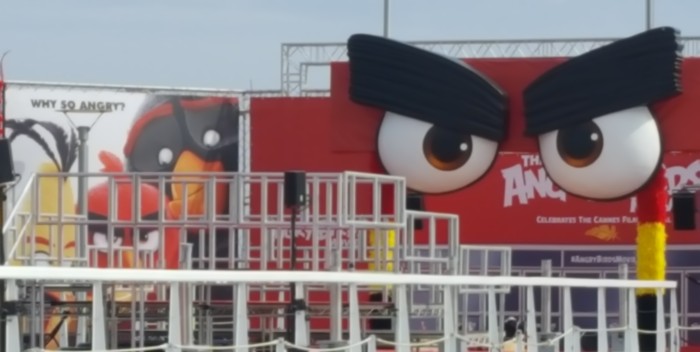 Cannes has not begun yet. It starts Wednesday night. But I’ve already been down to one of the beach clubs for pre-fest promo for Sony’s Angry Birds movie. The animated film stars Josh Gad and Omar Sy, who each appeared on a pier in black tie this afternoon. A (presumably paid) actor wore a very convincing Angry Birds outfit and posed for pictures with the boys. This was like an old time Cannes promo, with Champagne, mimosas, and hors d’ouevres galore. And the festival hasn’t even begun yet.

Everyone’s asking about security. Is it vey different. I would say, it’s subtle. A lot of extra security guards are posted, all wearing black suits, white shirts and ties. They’ve been incredibly friendly so far. We’ll see how long that lasts! (Seems like it will. Very calm on the Croisette.)

But bags are being checked. Wanding is going to be common practice. Patience, not known here as a virtue before, is going to be needed. Maybe umbrellas, too, from what I hear.

Meantime, Omar Sy has really become a movie star since “The Intouchables.” He told he’s got a bunch of projects coming. He starts in Ron Howard’s “Inferno” with Tom Hanks this October.

Josh Gad heads from here to Buffalo, New York tomorrow– to play my actual great uncle Sam Friedman in “Marshall” with Chadwick Boseman as Thurgood Marshall, directed by Reggie Hudlin. Sterling K. Brown has joined the cast. Two more hires are imminent for announcement. I know one, and I can say I am very pleased.

So get ready– it’s all starting. Tomorrow brings Woody Allen, Kristen Stewart, Justin Timberlake, and a bevy of celebs to town. Steven Spielberg is said to already be here, maybe on his yacht. Somewhere in town a Starbucks has reportedly opened, but we’re going to ignore it. But where our old beloved news and stationery store once stood across from the Palais is now … Dior!