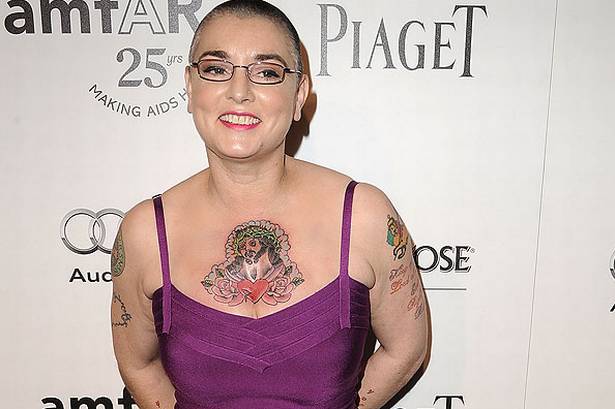 The latest Facebook post from Sinead O’Connor after Arsenio Hall filed suit against her for claiming Arsenio helped get Prince and Eddie Murphy get drugs back in the day, Arsenio vehemently denies all of it.

I’m more amused than I’ve ever dreamed a person could be and look forward very much to how hilarious it will be watching him trying to prove me wrong.
I’m also very happy to notice that the DEA have taken me seriously enough to be thoroughly questioning all of Prince’s friends and aides from the last thirty years as to his KNOWN history of hard drug use and where he obtained his drugs. I do not like drugs killing musicians. And I do not like Arsenio Hall. He can suck my dick. That is if he isn’t too busy sucking someone else’s dick. : )

Earlier, Sinead had posted a long diatribe that she says cannot be republished without her permission. Well, the whole of it can be found here. The gist: that they had a bad date during which Sinead was offered a “spliff,” which she smoked.

“There’s something in the splif that isn’t marijuana. I don’t know what. I never had it before nor since. Its so hard to describe. Its like if I hadn’t had a stronger mind I wouldn’t have known what I was doing. Its like ‘Me’ went very far into the back of my mind and something else took over the rest.
Everything inside me and outside me was undulating
Suddenly he’s laughing. An “Aha! You’re not so tough now” laugh. My body is melting into a dead weight, trying to pull me to the floor. His smile looks like the wolf in Grandmas’s bonnet.
I know what he’s done.”

So this is after Arsenio filed suit following the original post.

I do wish Sinead would stop using Facebook and get serious about all this. I know she had some problems last winter. But when I met her a couple of years ago at a Curtis Mayfield tribute show in New York, she was quite lucid and a lot of fun. The accusations and the lawsuit can just go on and on, but if she really has information and wants to dispense it, I think we’d all like to hear what it is.

Sinead– my email is showbiz411@gmail.com.