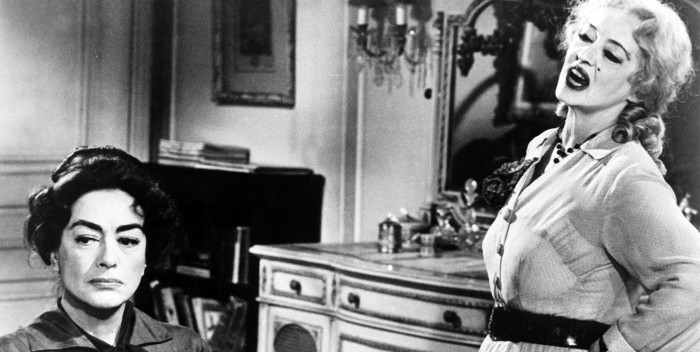 It’s come to this, has it? Susan Sarandon will play Bette Davis and Jessica Lange will take on Joan Crawford in a TV re-creation of one Old Hollywood’s most notorious feuds.

Davis and Crawford were always rivals. But when they co-starred in the camp classic “Whatever Happened to Baby Jane?” that was it. They really came to hate each other.

Now Sarandon and Lange will bring this hoary old saga to life in the first episode of a new Ryan Murphy produced series for F/X called “Feud.” Murphy is producing along with Dee Gardner and Brad Pitt.

That’s Victor Buono of “Batman” fame to us kids.

There will be seven other “Feud”s in the series. Can you think of some? How about Debra Winger v. Shirley MacLaine? Johnny Carson v. Joan Rivers? And you can already guess that Murphy is writing one for Lady Gaga. This series will be good campy fun. (Hey– how about Simon and Garfunkel? Jason Schwartzman and Charlie Puth as the young singing duo who come to hate each other?)