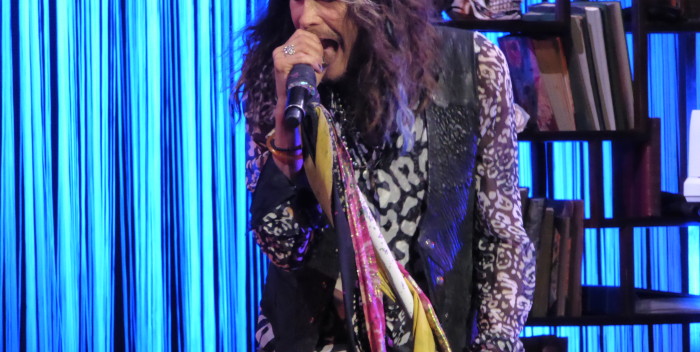 Steven Tyler– a moving target for photographers, a blur of a rock star– launched everything last night: his charity for abused teen girls, his first solo album, and a tour at Lincoln Center’s Avery Fisher-now-David Geffen Hall. The ushers had never seen anything like it. Even Beethoven– the usual composer featured in this room– could have heard this show, and he was deaf. 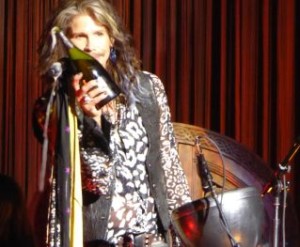 Tyler, who exudes charm and style, is finally apart from Aerosmith after over 40 years. Their first big hit was his masterpiece, “Dream On,” in 1976, which he’d written years earlier at age 17. They’ve never looked back despite breakups, make ups, rehabs, accidents– the full panoply of rock band adventures.

But now Tyler has a charity– “Janie’s Fund”— named for the band’s hit “Janie’s Got a Gun”– for abused teen girls. (It was officially launched back in November, but this was its Lincoln Center debut.) Tyler is serious about this as the father of three daughters who were there last night, too– Liv, the actress; Mia, the model; and Chelsea, the singer with husband Jon Foster. It was quite a family affair backstage, too, as Liv’s “Armageddon” father, Bruce Willis, also showed up, plus lots of Tyler’s Tallerico relatives including a cousin who played Motown songs on the piano in the large Green Room.

Not only that: the tour features videos and a film made by none other than “Rush Hour” director Brett Ratner, who was also in attendance. And the great rock jewelry designer Loree Rodkin.

“Out on a Limb”– echoing the title of a Shirley MacLaine book– was a mixture of one man show, memoir, and just a flip through the scrapbook of Tyler’s huge Aerosmith catalog. He did all the hits– “Sweet Emotion,” “I Don’t Want to Miss a Thing,” “Walk this Way,” “Crying (Since I Met You),” and of course “Dream On.” Tyler also introduced a bunch of new songs from his solo album– coming in July from Big Machine– including at least one that smelled like a hit called “Only Heaven.” Watch out for that one.

His voice? Lots of swagger and blues, sweet as ever with just enough coarseness that the Tyler vocal remains a distinctive beautifully aged wine. (There’s nothing else like it.) Pretty much no one can from a shriek to a howl to a purr like Tyler.

Steven told me after the gig “it’s weird to turn around and see all new people behind me, but I also feel a lot of love from them.” Is he energized from it? His quick reply: “Ya think???”

Get ready because the summer of Steven Tyler is upon us!