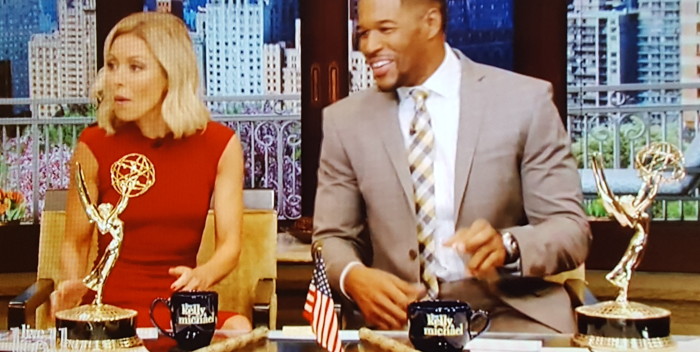 NOW: Kelly Ripa wins Best Actress as a Talk Show host who’s angry but just got an Emmy she has to share with her departing co-host to whom she’s not speaking.

She was alone in the category.

This morning Kelly and Michael Strahan are on their “Live” show, thank everyone for the Emmy Award they won last night at the Daytime Emmys. It’s ironic since Strahan is leaving in ten days, and Ripa is barely speaking to him.

So far she’s all smiles, and no one has said anything biting or snarky. But they did give away the “Game of Thrones” spoiler of the day — Jon Snow is alive!

And it all happened in sweeps!

Congrats to Michael Gelman. I know it looks easy to produce a live one hour show every day with crazy people, but it isn’t.