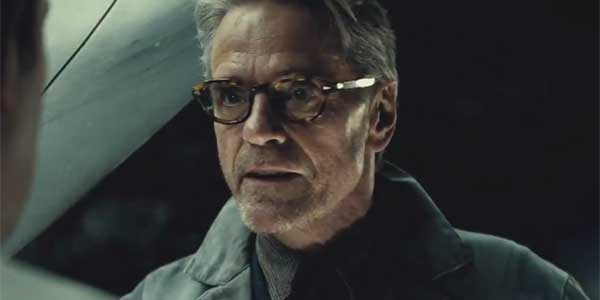 This is news to me. Maybe the fanboys and girls know it. But Jeremy Irons is bringing Batman’s butler Alfred to Zack Snyder’s “Justice League of America.”

Irons mentioned this to me the other night as I was congratulating him on yet another wonderful dramatic performance, this time in “The Man Who Knew Infinity.”

Irons just finished “Long Day’s Journey Into Night” outside of London, where he got rave reviews. (He took in Gabriel Byrne playing the same role this week on Broadway.)

Jeremy is a busy guy. A consummate actor of the top rank, he’s always been able to mix low and high culture in his films. He’s often a villain. But he’s clicked as Batman/Bruce Wayne’s butler Alfred, succeeding Michael Caine, Michael Gough and of course, the late great Alan Napier.

The new Alfred is becoming more and more like M from the Bond movies, moving from serving tea to Aunt Harriet to triangulating virtual lasers and configuring the Batmobile. Irons looks like he’s secured the Alfred role for the run of Snyder’s time. After “Justice League,” he’ll come back in the Ben Affleck-directed free standing “Batman” movie. And if Matt Damon doesn’t play Robin in that one, well, it won’t be fair!