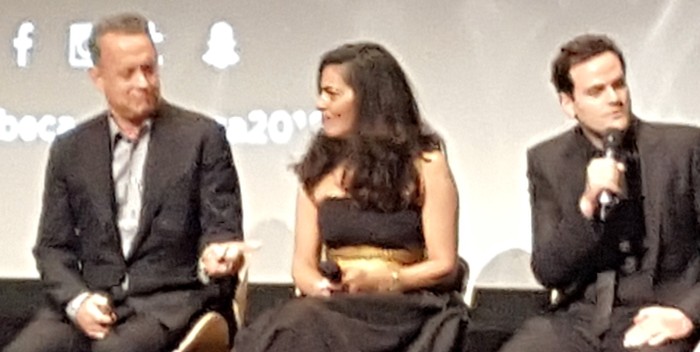 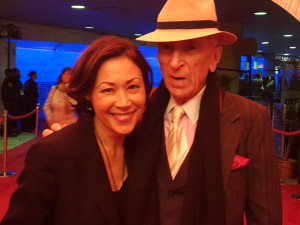 Tom Hanks is so charming, you know, he cannot go wrong. On stage Wednesday night for a Q&A at the Tribeca Film Festival screening of “A Hologram for the King,” he had the audience in the palm of his hand. Luckily, “Hologram” is the kind of movie where that Hanks persona also plays a big part– the people in the theater wanted to hear how the movie was made.

Hanks, director Tom Tykwer, and actors Alexander Black and Sarita Choudhury talked about how difficult the film was to shoot, from sand and thunder storms in Morocco to finding a place (it turned out to be the Dead Sea in Egypt) for an amazing underwater sequence. While the other three were describing the logistical difficulties, Hanks was wide eyed with enthusiasm.

“Come on,” he said in his sort of nasal California good guy voice, “it was an ad venture.”

Hanks plays Alan Clay, an American businessman sent by his company to sell a hologram technology to the King of Saudi Arabia. His marriage is over, his finances are a mess, and health is questionable. He gets a Westernized driver (Black, in his first movie ever, very impressive) and a lover (Choudhury, brainy and gorgeous). The key to “Hologram” is the detail work, the nuance, excellent editing and cinematography, and the humor.

You also knew it was a big deal because Roadside Attractions (which I often criticize) put their best feet forward with a swanky dinner at White restaurant in Tribeca. I sat with Talese, RA’s erudite Howard Cohen, director J.C. Chandor, and filmmaker Robin Leacock. There was a lot off the record gossip. Cohen did talk about a big slate of upcoming good movies including Kenny Lonergan’s “Manchester by the Sea.”

As for “Hologram,” it’s a fish out of water story, told smoothly and with a lot of grace and humor.  Don’t take Tom Hanks for granted– he’s a comfort to see on the screen because he’s so accomplished. But he’s always doing something new. His Alan in his wheelhouse, but a character you root for all the way.

The story, by the way, is based on Dave Eggers’ popular book. As Hanks noted, Eggers doesn’t have many film adaptations. The author, who’s a very serious spent a lot of time on set. Twyker noted, “He laughed a lot.” That’s a good sign.