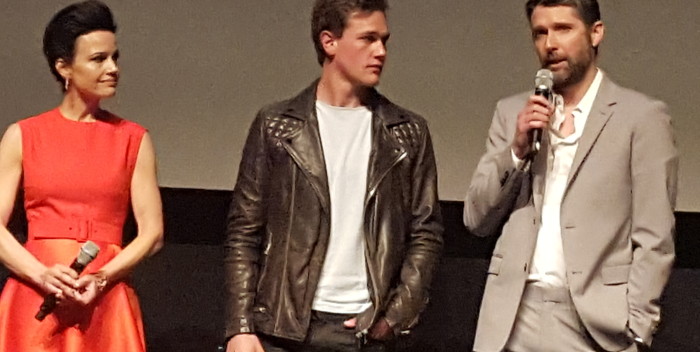 A few ‘name’ people showed up tonight for Bart Freundlich’s “Wolves” like Ethan Hawke, and Katie Couric. Maybe they’d heard Freundlich, who’s made five films, is the husband of Julianne Moore. Or maybe they liked Freundlich’s earlier films, like “The Myth of Fingerprints.”

“Wolves” turns out to be the “Whiplash” of Tribeca, full of spunk and so much tension that even as it navigates a couple of cliches (gambling debts sinking a family, coming of age angst) you are rooting for everyone.

Michael Shannon and Carla Gugino are a struggling Manhattan middle class couple with a teen son (Taylor John Smith, 20, in a breakout performance) who’s a basketball star in his senior year of high school. Shannon is a ne’er do well novelist teaching creative writing at a community college. Gugino has  mid level job at a department store. They’re hoping Anthony, the son, can get a sports scholarship to a good school, maybe Cornell.

So that’s the set up. Except failure pervades Shannon’s teacher, he drinks and gambles. We meet him just as he’s gambling his little family’s tenuous future. He has a good guy brother (Chris Bauer, excellent) who will help him, to a point. But otherwise, he’s sinking. Gugino sees it, still loves him, but loves her son more.

Freundlich pulls it off because he’s invested these people– you’ve seen them before in other situations– with a lot of texture and depth. Plus, Taylor John Smith as the basketball hero is a find. He just gets away with playing 18, and seems like a high school kid. He’s also got a mentor in veteran actor John Douglas Thompson as Socrates, who keeps his advice to a minimum but comes to Anthony’s aid as needed.

Freundlich is smart not to lay anything on too thick here. Emotions are kept in eheck, but the realities of the situation are honestly felt. Like Anthony, you feel the director has found his spot on the court at last, and is scoring time after time.