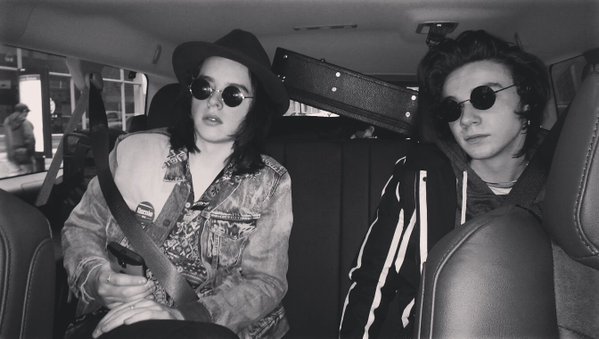 You know a movie is good when everyone wants to see it. Last night a celebrity crowd that ranged from Courtney Love to Rudy Giuliani (but also included famed directors Terry George and Paul Haggis) showed up waaaaay downtown at the new Metrograph for John Carney’s “Sing Street.”

Carney, you know, made two other musical fables, “Once” and “Begin Again.” “Sing Street” is the latest in a series of charming tales that promise the music will save you even when things look bleak. Carney’s set this one in his hometown of Dublin, and cast it with a bunch of unknown young people who are uniformly excellent.

The focus is on Cosmo, played by (in real life too) 16 year Ferdia Walsh-Peelo, an accomplished musician and singer-songwriter who could play Jonathan Jackson’s younger brother on “Nashville.” Cosmo’s parents are breaking up, they have no money, and he’s moved from Catholic school to public school. He gets picked on, all that, but then sees a beautiful girl named Raphina (Lucy Boynton), and decides to start a band.

The band, called Sing Street, fills up fast once Cosmo finds a like minded songwriter in Eamon (played beautifully by Mark McKenna, 19). Cosmo also rates a live at home older brother, a philosopher and late bloomer named Brendan (Jack Reynor) who sees a life for Cosmo he may have already missed.

Unlike the characters in “Once” or “Begin Again,” who are trying to get hit records, the “Sing Street” gang is just trying to survive high school, maybe make a living, and keep going. Because Carney has set the film in the early 80s, he’s able to show the aspirations of making homemade music videos. The Sing Street band is most hilarious as the boys hear new songs on the radio by Hall & Oates or Duran Duran and try to write good copies. They try on one fashion after another trying to find their own identities.

Carney used Gregg Alexander and Danielle Brisebois to write the songs for “Begin Again.” This time, his music comes from another one of my lesser known favorites, Scottish songwriter Gary Clark, known to some from the band Danny Wilson. (He is not to be confused with Texas bluesman Gary Clarke Jr.) His songs are brilliant little pop gems. If you don’t know him, stream or download the album “Meet Danny Wilson” and the hit it spawned, “Mary’s Prayer.” He’s an unsung hero.

At the after party last night, Ferdia and Mark performed three songs from the movie. (Laura Michelle Kelly, star of “Finding Neverland” on Broadway, arrived just in time to catch the act.)

Attention Jimmys Fallon and Kimmel, Conan, Colbert, Kelly and Michael– put these guys on your shows. Republic Records has the soundtrack CD. If they’re smart, they’ll make a whole album with these guys. They’re twice as good as Bieber or any of these pop tarts. And they know their way around a guitar.

“Sing Street” opens this week in NY and, then spreads out in two weeks. Spread the word. Like “Everybody Wants Some!!” this a reason to get excited about movies.