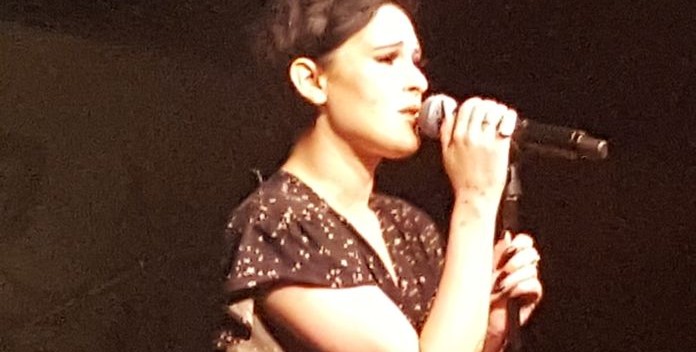 You know, Hollywood kids have it tough. They grow up in the shadow of a famous parent, sometimes two. Rumer Willis, eldest of Bruce Willis and Demi Moore’s three daughters, had it tough from the get go. Each of her parents is a Big Star, always in the news. Rumer was tabloid fodder as a teen, and grist for the gossip mill. Didn’t think she’d make it, didya?

Rumer competed on “Dancing with the Stars,” went into “Chicago” on Broadway, and there were no jeers. Now it turns out she’s a top notch singer, with a lovely cabaret voice that can belt with the best of them. She is also unafraid, poised, professional and ready for her closeup. And yet, here she is on stage at the Cafe Carlyle, intimate setting and stage that belonged to Bobby Short, Elaine Stritch, and still Woody Allen’s clarinet. You cannot fake it here. (Some big pop stars wouldn’t last very long in this room.)

There were no celebs in the audience Tuesday night as Rumer kicked off her run at the Carlyle. (The Hollywood gang will come when she settles in.) She has a crack three piece combo (James Sampliner, Danny Weller, Dan Berkery), an excellent arranger (Christopher Lloyd Bratten) and a gay best friend-life partner-music producer (Tye Blue) right out of a rom com.

Rumer, as she told us, is about to turn 28. She is full of confidence and maybe brings to the songs some world weariness after running around Hollywood and US Weekly. Her voice– take Demi Moore’s sexy scratchy tones and mellow them out with a young Bruce Willis purring to Cybill Shepherd in “Moonlighting” — and it works. Rumer also presence (she’s the good kind of tall) and has a killer smile. (Well what did you expect?)

Her song choices range from standards to Broadway to a couple of cool rock numbers. She can handle Liza Minnelli (“Maybe this Time”). She sort of found common ground between Amy Winehouse (“You Know I’m No Good”) and Billie Holiday (“God Bless the Child”). Fiona Apple worked (“Criminal”) although I preferred her take on Doris Day (“Perhaps”).

Rumer has a nice modulation, and can handle smoky, ironic, and sweet. There’s an intelligence at work here, too. She and her buddy made a variety show duet of “Class” from “Chicago,” too– which was understated. No “Chicago” jazz hands. Rumer said, “I played Roxie but I think of myself more as Velma.” Frankly she reminded me of another Demi– Lovato.

Rumer ended the set with a Brandi Carlile song I don’t know (you all probably do)– called “The Story.” Rumer should cut it, retitle it “I Was Made for You,” and get it out as a single on iTunes. That’s a hit. Some smart record label should get over to the Carlile and sign her up ASAP. The rumer is, she’s got it.