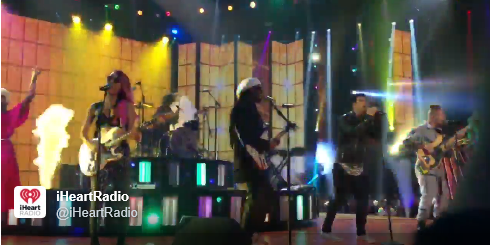 What a sad state of affairs for Top 40 pop music stars. They went head to head with country music all stars on Sunday TV. Guess who won? (Oh come on, guess.)

It doesn’t matter who won which award, because all the “winners” were present and planned, especially at the I Heart Awards which were tightly scripted. The ACMS were probably the same, but the contrivance was less pronounced. It also helped that the country stars performed live, or at least what looked like it. The I Heart Awards performers brought lip synching and singing-to-track to new heights.

Knowing these two shows would be going up against each other, there were trade offs. Pop star Katy Perry sang on the ACMs with Dolly Parton. So country star Brad Paisley appeared on the I Heart Awards. Each show got a Jonas brother–Nick was on the ACMs and Joe ate “Cake by the Ocean” on the I Hearts.

In the case of the latter, let me say thank goodness. “Cake By the Ocean” was the only number on that show– with Nile Rodgers on guitar– that actually seemed alive. Others, like Zayn Malik, appeared to be in trances. Justin Bieber was particularly zombie like.

The oddest moment of the I Heart commercial– Bono and the Edge accepting the Innovators Award. They were the oldest people in the room by 50 years. No mention was made of their bandmates Larry Mullen or Adam Clayton. I do think Bono actually said, “Rock the vote,” which made him sound like everyone’s grand-dad. But U2 are signed to Live Nation in a recording/touring deal, so it was a fait accompli.

Meanwhile, Taylor Swift and Selena Gomez sat at the main table like judges in a singing contest, waiting for their turns in the show. At another table sat the I Heart Radio- Clear Channel folks. It was like they were presiding over a bar mitzvah. And for some reason, there were cutaways throughout to sports announcers. Very strange.

Over at the ACMs, I came and went, trying to watch the “Walking Dead” finale. Is Jeffrey Dean Morgan blackmailing a lot of people in Hollywood? He’s on every show. He gave a long boring monologue toward the end of the episode, so I switched back to hear Miranda Lambert sing the heck out of “Tush” with Billy Gibbons and Keith Urban. I also caught Dolly Parton– so much plastic surgery, it feels painful– and Katy Perry sing “Jolene” and “9 to 5.” It was all worth the wait.