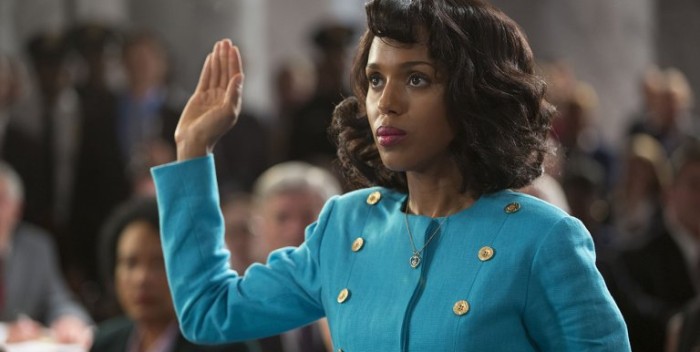 At the HBO premiere of “Confirmation,”  Oprah Winfrey, a surprise guest who was ushered in from the back and waited til the audience was seated before anyone knew she was there.

“Confirmation” is the story of the Clarence Thomas Supreme Court confirmation, and Anita Hill’s testimony in 1991, that held the country spellbound in front of TV sets for days. Believe it not, this happened 25 years ago.

Kerry Washington, who plays Hill, might find herself the winner of two Emmys this year, as she hasn’t won for “Scandal” yet, and she is a shoo in for a nomination for her exquisite work in this. She plays Hill with a steely reserve weaved in with integrity and honor. Hill was in the audience, and Oprah was the first to stand up and lead the standing ovation when HBO’s Film President Len Amato introduced her to the audience prior to the screening. The standing ovation was right on, the film is just brilliant and captivating

I asked Oprah after the screening what she thought of it, right after Kerry, who was sitting two rows in front of her, blew a kiss her way. “Just great, the movie said everything it needed too and everyone in it was just terrific.” Kerry told me that, “I was so honored to play Anita Hill. It’s exciting and it takes courage like she had, to go up against the forces that are more powerful than you.”

Anita Hill told me, “I am grateful for the media. It was a reporter from People magazine and two reporters from San Diego that changed the conversation immediately to sexual harassment rather than the Washington political circus it was. So I’m thankful to the media for that. “ I asked her if she was happy now in Oklahoma. “I am happy. I have to work at it, we all do, but I’m happy.”

Greg Kinnear gives one of his career stand out performances as Senator Joe Biden, now Vice President. Biden comes off not nearly as badly as the facts bear out by his inept handling of it all. He is seen as over his head and too protective of the old boy network, appalling as it was.

I asked Greg if he knows if Joe Biden had seen it, “Barbara Boxer, (she was also there) just told me that Joe Biden would definitely see it. So I’m hoping that means she’ll make him watch it.” Wendell Pierce is pitch perfect as Thomas, portraying his anger and denial to the hilt. As Hill, Kinnear said: “It’s hard for me not to believe her, so I do.”

The always terrific Jeffrey Wright, Grace Gummer, Bill Irwin, Zoe Lister Jones, Peter McRobbie, Eric Stonestreet, all give spot on performances. Besides Boxer, other guests included noted political consultant/producer Tammy Haddad (she consults for “Veep”).  Written by Susannah Grant (Erin Brockovich) and deftly directed by Rick Famuyiwa (“Dope”) and shot beautifully by Rachel Morrison, “Confirmation” is one of HBO’s best. Anita was justly feted for her courage, honor and class. As it should be.