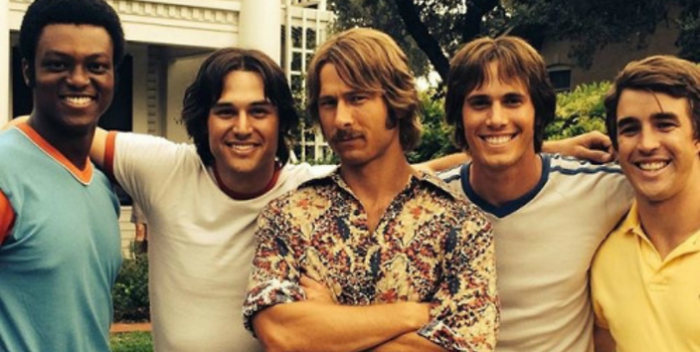 I’m one of those people who thought “Boyhood” was a masterpiece, and that Richard Linklater deserved to win Best Picture in 2015.

As we all know, “Boyhood” was filmed with the same cast over 12 years. So what to do next? Linklater cycled back to his 1993 cult classic, “Dazed and Confused,” about Texas high school kids in 1976.

For “Everybody Wants Some,” he moves forward to 1980, to a different group of kids, now in college, all members of a varsity baseball team, and creates the same kind of unique ensemble that made “Dazed” so memorable. Remember, that movie more or less launched Ben Affleck, Matthew McConaughey, and Parker Posey.

“Everybody Wants Some” is going to launch a bunch of its own stars, as all the young men who comprise the baseball team– and let me tell you, there is very little actual baseball in this movie– are going to take off. Among them: Blake Jenner as sort of the ingenue, Jake, and Glen Powell as the philosopher, Finnegan. There’s also a key performance by Wyatt Russell (son of Goldie Hawn and Kurt Russell) in the McConaughey-“Dazed” role (not give too much away). Watch him.

The whole group, though, is spectacular. They reminded me of the cast of “Diner” or “Breaking Away” even more than “Dazed and Confused.”

You can trace a line really, back to George Lucas’s “American Graffiti” up through “Diner” and “Breaking Away” to Linklater’s “Slacker” and “Dazed” to here. These are nostalgia pieces with rough edges, punctuated by the soundtrack of the time. As usual music supervisor Randall Poster has put together a group of songs that hit every note of Linklater’s sort of plotless plot.

In “Everybody Wants Some,” like “Boyhood” very little seems to happen. Or maybe a lot happens. It’s just how you measure time and its passage. “Everybody Wants Some” takes place over a couple of days before classes begin. The baseball team has been given two houses on campus and they’ve been warned– no girls, no drugs, no parties. Yeah right.

But this isn’t “Animal House” or even “Neighbors.” Linklater is too subtle and benign for that. His stories are circles. You feel like you’re almost back where you started as you come to the end. But really, everyone’s moved forward at least a little bit. Will these ballplayers every play ball? They do a little, but they’re off season. So they’re bonding, and chasing girls. Will they ever actually go to school? They will (I don’t want to ruin that).

With “Everyone Wants Some” what you get is a ton of charm, a lovely look back at a time when boy met girl and couldn’t look her up on Facebook or Google her– he to be ingenious and romantic. Life took a little more effort, and a leap of faith.

This is the sleeper hit of the spring, and maybe all of 2016.

Opens today in NY and LA in limited release, expands over the next couple of weeks.