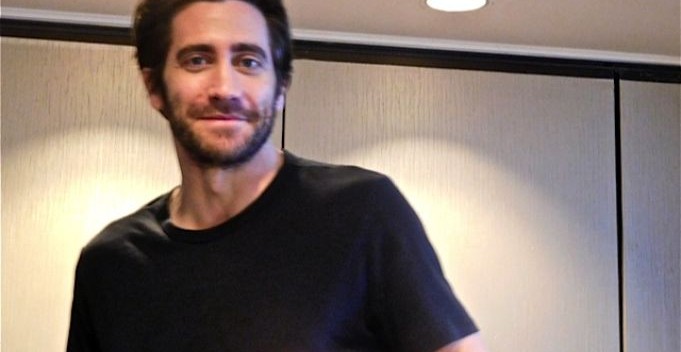 Jake Gyllenhaal is very handsome, even with a scraggly beard and wearing an unflattering loose t-shirt that does nothing for his “Southpaw” physique. At the Essex House in midtown Manhattan Sunday afternoon, the actor’s very blue eyes are a little puffy, possibly from too little sleep. Gyllenhaal just got back from the South by Southwest Film Festival the day before where “Demolition” was an audience award winner. (“Demolition” co-stars Naomi Watts, Judah Lewis, Heather Lind, Chris Cooper.)

“Demolition” is a terrific film directed by Jean-Marc Vallée (“Dallas Buyers Club,” “Wild”) that’s been bounced around a bit. It opened the Toronto Film Festival in September 2015 in anticipation of release, then was pulled back by Fox Searchlight for release months later. This week there was a stealth premiere party as “Demolition” is set to go up against the mega release “Batman vs. Superman.”

Gyllenhaal almost seems like a superhero in what is a very different part for the actor. He displays almost no emotion on his face for most of the film. He plays a successful Wall Street analyst with seemingly everything going for him until a tragic car accident– in which he was the passenger– results in his wife’s death. He comes out of it as though in a trance and his behavior becomes increasingly bizarre and unhinged. (This is no spoiler since it happens early in the film.)

I asked Jake what it was like to play a guy who displays no emotion though most of the film?

“It’s hard as an actor. As an actor you want to emote, just out of ego,” he said. “You think expression is about emoting but really expression can be internal.”

Gyllenhaal said he loved the film because it showed a guy who made conventional choices up until his wife’s tragedy and because he wasn’t listening to himself he became lost.

“He doesn’t know what he feels because he hasn’t listened to his own feelings and then he spends an entire movie trying to figure out how to get back to himself so he can feel what he wanted to feel about the event in the first place. And so in a way it’s this crazy journey to do that but it’s also, it’s hopefully a little bit of a message like, ‘Yeah take from convention what works for you but fuck the rest and be yourself.”

The movie’s title comes from what the character’s father-in-law (Cooper) tells him about how you have to demolish something and see how it’s made before you can put it back together. Gyllenhaal’s character smashes lots of things, including taking a sledgehammer to his beautiful modernistic glass house.

So what was he thinking during that scene where his anger looked so real?

“Oh I got a lot of that,” he laughed. “That’s the part of me that, you know, is really into the political system right now, but I think there is something, there is an expression, this guy’s searching for how he feels and he doesn’t know how to express himself, so he just does it in the physical world,” he laughed, which is always a mistake,” he laughed. “It’s always a mistake because that’s a really nice house.”