Gawker Media changed its corporate name in the UK on March 4th, very quietly. They’re now known as Greenmount Creek Ltd. The executive directors are not Nick Denton, but his sister Eva Rebecca Denton and Mr Adrian Wilhelm Weinbrecht, a London based photographer. 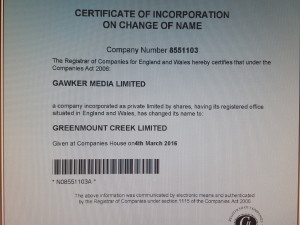 Additionally, as of , 1:35pm, since last night’s jury decision of $115 million in the Hulk Hogan case, none of the Gawker sites have posted a recap of what’s happened. Gawker has actually posted two dull items this morning.

In January, Gawker sold a minority stake in their company to Columbus Nova Technology Partners, a Silicon Valley and New York firm, in anticipation of a rough ride at the Hulk Hogan trial. Among the other entities owned by Columbus Nova are the Rhapsody Music Service and Guitar Hero. They are the US based affiliate of Renova Group, described on Wikipedia as “one of the largest Russian strategic investors in the metallurgical, oil, machine engineering, mining, chemical, construction, housing, utilities and financial sectors.”