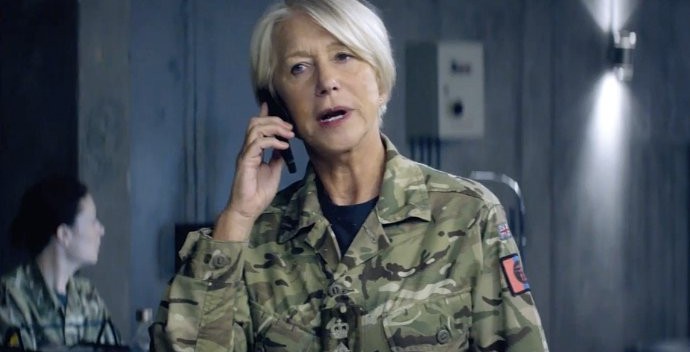 Dame Helen Mirren, Oscar and Tony winner, one of the greats, stars in “Eye in the Sky,” a movie that may turn out be a sleeper hit when it opens Friday.

At lunch today at the four star French bistro Le Grenouille, Dame Helen was asked by Ann Curry– moderating a panel with Mirren and director Gavin Hood– what her philosophy is about work and acting.

Mirren did not hesitate: “I guess I’d say Turn up on time, and don’t be an asshole.”

And really, if we all lived by that slogan, the world would be a better place!

It was great to see Ann Curry, freed from NBC News and making documentaries. Another former Today show veteran, Katie Couric, came to the lunch, as well as famed news correspondent Bob Jamieson, the great theater and movie director Julie Taymor, and Arianna Huffington. My own lunch table was filled with newshounds including Richard Cohen and Warren Hoge, as well as Sandy Brandt and Eleanor Kennedy.

“Eye in the Sky” premieres tomorrow night with a red carpet flourish and hits screens Friday. So far it has a 100 rating on Rotten Tomatoes. Bleecker Street president Andrew Karpen, “I’ve never seen a movie where people both anti-war and pro-military thinks it speaks to them. That says a lot.”

I won’t ‘drone’ on here. but wait til Thursday for more about this extraordinary film.