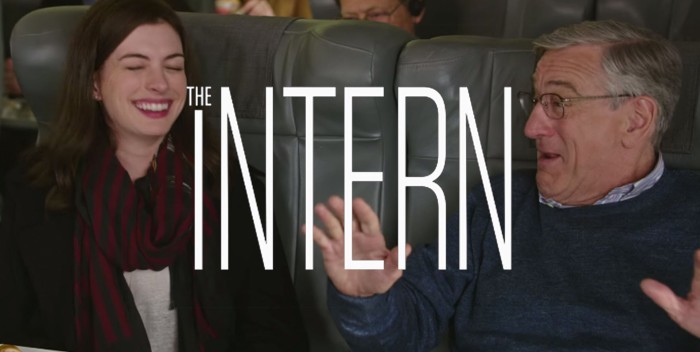 But if you want to know why #Oscarsowhite exists, “The Intern” is the reason. There isn’t a single black person in it except for Drena De Niro, Robert De Niro’s stepdaughter — and in a minor role.

The movie is set in Brooklyn, where I am sure I have seen black people in the past. Anne Hathaway runs a big internet company that sells some kind of clothes– they fit you, I don’t know. She has 216 people working for her in this company and not one of them is black– not her assistant, or the three other “interns” who come in with DeNiro, not the Andrew Rannells character who’s her second in command, not even her driver, whom De Niro dismisses.

Why are black actors fed up? “The Intern” is why. I’ve worked in a few offices in New York City in the last couple of decades. I have never seen an office as white as Anne Hathaway’s in that movie. It’s not unrealistic, it’s insulting. I know Nancy Meyers is famous for constructing these upper middle class Anglo fantasies. But really.

If Hollywood is going to change, then it’s not when the movies get to Oscar season. It’s when they are made. Casting directors, studio executives, directors, must make an effort to integrate their movies. And don’t tell me there are black actors for these roles. I will send you five for each of those supporting roles right now.

PS. Good lord: Anne and Anders live in a $5 million townhouse. So does Robert De Niro’s character, a retired middle manager who used to sell ads for the Yellow Pages. And his house looks like it was decorated by Williams Sonoma and Pottery Barn. LOL. They should have called it “Miracle on Montague Street.”