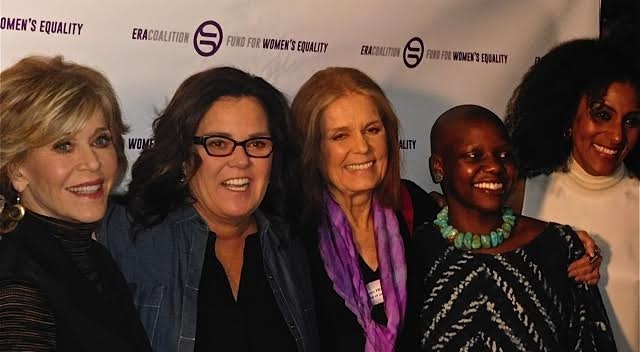 Jane Fonda on Bernie and Hillary: “I think he’s great. He’s very, very good at pointing out the problems and Hillary can solve ‘em.”

Fonda told us this at last night’s inaugural comedy fundraiser which she hosted for the ERA Coalition and the Fund for Women’s Equality. It was appropriately entitled “A Night of Comedy With Jane Fonda.”

Just moments earlier Fonda blasted Donald Trump telling the scrum of journalists that Trump was “fanning the flames of peoples’ anxieties” and that his views were “racist.” He was “dangerous,” she said. “Even if he doesn’t make it, which I don’t think he will, all those young Muslims now, it will drive them closer to the terrorists.”

I asked Steinem, who looked fantastic in her trademark chunky Native American belt, to clarify remarks she made on “Real Time With Bill Maher” about young women who supported Bernie Sanders,’ in which she suggested it was because “boys” supported him. Her comments unleashed a firestorm on Social Media and she seemed determined not to get in that quagmire again. “I learned not to comment in the world of twitter, so it’s on Facebook,” she told me. She did say of Sanders’ appeal, “I think that Bernie is saying the message of occupy, so he’s stating the problem very clearly, which is a good thing. And Hillary is stating the solution very clearly, which is a good thing and hopefully I’m sure in the future they will end up together.”

Steinem told me she didn’t watch the New Hampshire Republican debate. “I was on the redeye coming back from Los Angeles,” she said. As for her take on the Republican campaign, she said dolefully, “I’m sorry to say that they’re not Republicans. Those of us who remember the real Republican Party, which supported the Equal Right Amendment before the Democrats,” she said. “Goldwater and others were pro-choice. These are extremists who’ve taken over the Republican Party, and it’s very dangerous to have one of our two great parties in the hands of extremists.”

Rosie O’Donnell who is usually talkative and gracious on the red carpet posed for photographs, but a publicist said she would not be doing interviews. Later she would go on to perform a ten minute comedy set focusing on the travails of raising four teenagers. “My son told me he’s writing a book, ‘Life With Mom, Not So Rosy,” she cracked. She said she adopted a baby to remind herself she really likes kids. She ended her set with a serious discussion of the signs of a heart attack, which she noted took more female lives than all other diseases combined. O’Donnell said she had had a 100 percent blockage. Most people who have this “die before they hit the floor,” she said. What O’Donnell didn’t discuss was Donald Trump or the political campaign.

Steinem managed to get in a few zingers about Trump in her introduction to Jane Fonda. She said it was challenging to find humor when Trump was in the political landscape. “It’s hard to surpass,” she said. “I hope that there will soon be a group of rich people to explain that he’s disgracing the name of rich people,” said Steinem. “He’s not really a successful businessman, he is a successful con artist and somebody has figured out that if he had just taken the $200 million that he had inherited from his father and invested it, he would now have more money” so after going bankrupt he wouldn’t have had to “stick everybody else with his debt.”

On a positive note, Steinem praised Fonda and thanked her for hosting the evening. “When she said yes it was magic,” Steinem said. “She is so smart and brave and creative and kind. And she is always, always there. She has been punished for being right about Vietnam, and it was so wrong,” she said. Nobody could be a “better friend, a better sister, a more talented woman and a more courageous woman than Jane Fonda.”

Fonda conceded she was late to feminism. “I couldn’t be an embodied feminist where it was in my blood and my bones until I left behind my inauthentic relationships with men, (with) my father, my husbands, my lovers. How can one be an embodied feminist if behind closed doors you’re leaving the authentic part of yourself behind in order to please, to be a good girl?” she asked. “For me everything changed in 2000, I was 62 years old. I am a quintessential late bloomer. I had become a single person pretty much for the first time in four decades.”