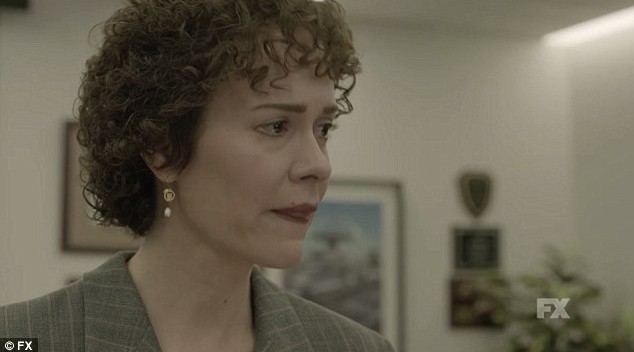 I just finished watching six hours of “The People vs. OJ Simpson.” (It begins this week on F/X.) You must understand, I covered the OJ Simpson criminal trial from several days after the murders in June 1994 until the day of the verdict in October 1995, for New York Magazine. (It was a tough deal because my editor, Kurt Anderson, thought the story was beneath us– he said so– and thought no reader of New York would be interested in it.)

During those months I wrote the Intelligencer column with Pat Wechsler, I visited the Simpson courtroom as much as I could. I also wrote at least one story a week about it, often more. One of my stories, about Kato Kaelin selling a book for a million dollars during the trial– after the preliminary hearing judge ordered all witnesses not to speak to the press– caused such a sensation that Marcia Clark had to turn him into a hostile witness on the stand. Clark was shocked by this revelation when we published it. The reality was, she had no idea what was going on in the Simpson circus, and was outplayed. She either couldn’t keep up with the cast of characters and their shenanigans or didn’t want to. It was her undoing.

Venality and stupidity were all around her. She had no idea what the defense attorneys were capable of doing pr-wise, or what skillful manipulators they were. She was clueless, and Chris Darden even more so. Plus Judge Ito was basically an idiot. I reported on January 30, 1995 that Larry King, his daughter, and his producer, grand-standed in Ito’s courtroom for 38 minutes. While everyone waited, King got a private meeting in chambers with Ito. WTF? as they say. When Larry et al emerged from chambers, he proceeded to shake hands with the defense lawyers. He tried to shake hands with OJ but was stopped by a court officer. The trial was completely tainted.

This is not in the mini series. Neither is the fact that by the end of January 1995, as the trial began, Simpson published a book called “I Want to Tell You,” essentially defending himself. That’s just skipped over, as is the Kaelin book revelation. And errors include Clark, not Darden, examining Rosa Lopez, the maid who worked in the house next to Simpson’s, about details of the night of the murder. This is one of those kinda-sorta factual movies.

Some quick thoughts about everything else: “The People vs. OJ Simpson” is beautifully made. Sarah Paulson is so brilliant as Marcia Clark she will win an Emmy Award. Even I’m sympathetic to Clark, watching Paulson play her, and I thought Clark was a dope. Cuba Gooding Jr., Courtney B. Vance, David Schwimmer, Nathan Lane, Sterling K. Brown, Bruce Greenwood, Robert Morse as Dominick Dunne, Connie Britton as sleazy Faye Resnick– there isn’t a flawed performance in the first six hours. As much as I write about John Travolta’s crazy personal life and Scientology, hear this– his Robert Shapiro is brilliant. Brilliant.

But there’s something vitally wrong here. Ryan Murphy’s series is about the lawyers. It’s told from their perspective. Some of it is made up or changed to dramatize the story and make Clark sympathetic. (I love that when Darden visits her in her office late at night, the soundtrack is R&B, Otis Redding, Average White Band. This is to indicate “soul”.) There are big elements missing, however. The victims are totally absent– Nicole Brown and Ron Goldman are secondary to their own murders. OJ himself is under developed. I give credit to Cuba Gooding, Jr. because the writers are not that interested in Simpson, per se. This movie is not about him. Weird, huh?

Indeed, so much of what really happened during the course of the nine month trial is missing that it kind of cuts against the quality of the series. This is the writers’- and Ryan Murphy’s– take on the trial. Now, maybe in episodes 7 through 10 it changes. But what I’ve seen shows that the source material was limited. And way too much time is spent building up to the trial, which doesn’t really start until episode 5.

So sure, that’s entertainment. But it’s not history, and it’s very inaccurate. A lot of people key to the story simply aren’t there, starting with OJ’s loyal secretary, Cathy Randa, as well as the avaricious Brown family, Ron Shipp, or a half dozen key players. (There is so far no mention of the defense team’s private investigators.) Instead, we get Robert Kardashian (played so well by David Schwimmer) having lunch with his kids because we know (wink wink) they’ve become fame whores in current time. (Really, who cares?) We see Faye Resnick meeting for the first time with sleaze ball publisher Michael Viner. (Again, really?)

Maybe the real story of O.J. Simpson will come out in the ESPN documentary later this spring. Maybe this series will right itself in the last four episodes. But I doubt it will. So, enjoy it for the acting and the production values. But remember, this is a “fictionalized” account of something we still don’t have a handle on. 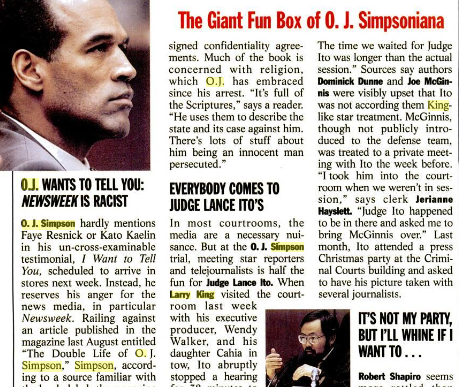 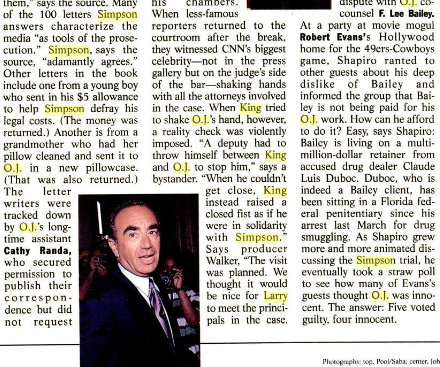