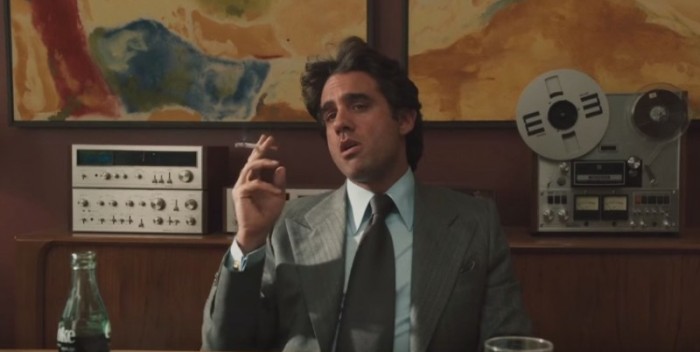 OK, so I guess Marty Scorsese never sleeps! He somehow made “Vinyl,” a movie– I thought it was going to be a TV pilot, but it’s a feature film– while he was making “Silence” halfway around the world.

HBO knows they have a hit in “Vinyl,” which is also a 10 part series following the premiere movie. So last night, accommodating executive producer Mick Jagger’s Rolling Stones tour schedule, they held a rare A list event at the Ziegfeld and Cipriani to celebrate the show. “Vinyl” launches on Sunday, February 14th.

In a week when David Bowie died, “Vinyl” recaptures the Bowie heyday of glam rock and a bankrupt New York circa 1973. Scorsese and writer Terence Winter, I am happy to say, have nailed it. All the grit of the city and the dirty record business come alive in “Vinyl,” which feels like a story that falls in the Scorsese timeline between “GoodFellas” and “After Hours.”

Bobby Cannavale finally gets his Best Actor role, his Don Draper part, called Richie Finestra. Cannavale will waltz away with an Emmy next fall for playing Richie, owner of a struggling, failing small record company trying to stay afloat by selling itself to Polydor in Germany for millions. It’s a scam– his American Century Records is worth nothing– but the sale will make him and his execs rich and change their lives.

I’ll tell you more about “Vinyl” and its incredible detail– someone did a lot of research because this thing reads with great verisimilitude– closer to its premiere.

Scorsese told me he credits his cinematographer Rodrigo Prieto (Wolf of Wall Street, etc) for the look of “Vinyl,” but fans of this incredible director will see that “Vinyl” is sort of an instant mini-classic for him. The feel of it is quite unlike anything on television or any of its new ancillaries. It’s really brilliant movie making. I can’t wait to watch the 10 regular episodes, which, by the way, Scorsese oversaw.

Many “insider” laughs for local New Yorkers, too– about mayor Abe Beame, who nearly destroyed the city; and references to local Long Island rock band The Good Rats made me guffaw.  Scorsese also restaged the entire 1973 Mercer Arts Center collapse–quite an accomplishment.

PS Kudos to Jill Larson of “All My Children” fame. She was in Scorsese’s “Shutter Island” and is back as Juno Temple’s aunt here. Plus, our pal Radio Man appears in the opening scene. He was also in “Shutter Island.” Funny that “inmates” from that insane asylum now populate 1973 New York!