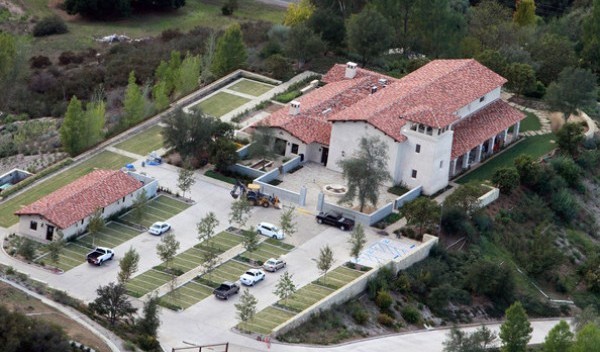 Wasn’t it nice to see Mel Gibson up there on the stage at the Golden Globes? It kind of made you nostalgic, didn’t it?

According to just posted Form 990 for Mel’s AP Reilly Foundation, he now has $70 million worth of assets parked in this tax free account. In 2014, he crossed the $70 million line by adding $210,400 in donations.

The AP Reilly Foundation exists to fund and operate Holy Family Church in Agoura Hills (Malibu), California. He built the church for his Pope-hating, Holocaust denying fathers. Mel was inspired by his dad, Hutton Gibson, who is still alive despite all odds. Hutton has his own followers of zealot Catholics who don’t acknowledge the Pope and don’t think the Holocaust happened. They don’t agree with modern Catholic doctrine of any kind. Their church is independent and not part of the Catholic Archdiocese.

And Mel’s dad? He’s 96 years old. A decade ago, he was quoted thusly in the New York Times Magazine by Christopher Noxon:

“Go and ask an undertaker or the guy who operates the crematorium what it takes to get rid of a dead body,” he said. “It takes one liter of petrol and 20 minutes. Now, six million?”

Across the table, Joye [Gibson’s wife] suddenly looked up from her plate. […] She had kept quiet most of the day, so it was a surprise when she cheerfully piped in. “There weren’t even that many Jews in all of Europe,” she said.

“Anyway, there were more after the war than before,” Hutton added.

The entire catastrophe was manufactured, said Hutton, as part of an arrangement between Hitler and “financiers” to move Jews out of Germany. Hitler “had this deal where he was supposed to make it rough on them so they would all get out and migrate to Israel because they needed people there to fight the Arabs,” he said.