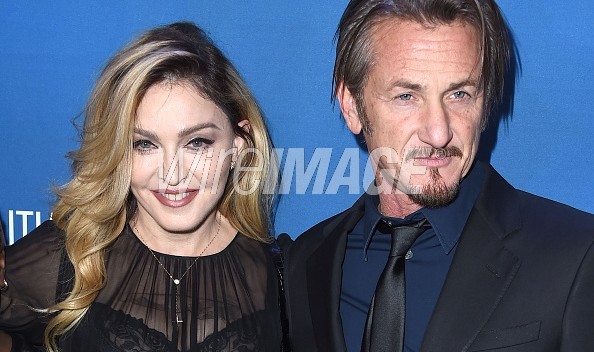 Madonna was ex husband Sean Penn’s date tonight at Penn’s annual Haiti fundraiser. After the revelation that Penn has interviewed international criminal El Chapo, it seems like he can handle his ex. They are thick as thieves, very affectionate, posing for pictures with two of Madonna’s children on the red carpet.

But the real excitement in the Montage hotel ballroom was Madonna’s surprise acoustic performance of “la vie en rose.” She accompanied herself on ukulele, and impressed everyone including Leonard DiCaprio and Justin Bieber (who stopped in briefly but lost interest). Madonna told the crowd, referring to Penn, “I loved you when I first laid eyes on you and I still love you just the same. I just wish you didn’t smoke so many cigarettes.”

Madonna and Penn were married from 1985 to 1989. They have no children together.

Are they back together? No one can say for sure, but the formerly married couple put on quite a show Saturday night while millions were being raised for Penn’s J/P Haiti foundation. They sat almost on top of each other at the main table, with DiCaprio across from them.

Last year, Penn’s date was Charlize Theron, and there were certainly many more celebs. But this year, aside from the main table, Pamela Anderson was the main attraction.

For a short time, when Madonna sang, pop twerp Justin Bieber ambled in and plopped down to watch her performance with a couple of friends. But when Madonna was finished, so was the Beebs. He hopped up and exited. A waiter told me Bieber basically “lives” at the Montage, as well as at a house in Beverly Hills.

Madonna later contributed the ukulele to the live auction. She told the auctioneer that she’d sign it, “lick it,” and “kiss it” when her tour was over in March. She also said she’d put something secret inside it for the highest bidder. “It will be wet inside and dry inside,” she said. When the auctioneer asked who’d made the ukulele, Madonna replied: “None of your f—ing business.”

A lunch with Penn and DiCaprio, plus a night at DiCaprio’s Palm Springs spread, went for the bargain price of $200,000. Of course, many in the room may not have known that Penn had interviewed El Chapo, and might have good anecdotes from that experience.

Penn is devoted to Haiti, and is clearly making progress down. He’s so passionate about it tears came to his eyes twice talking about getting health care for a dying teen. If he’s diverted Madonna’s attention from Kabbalah into this worthy cause, then he’s really scored points. Bravo!