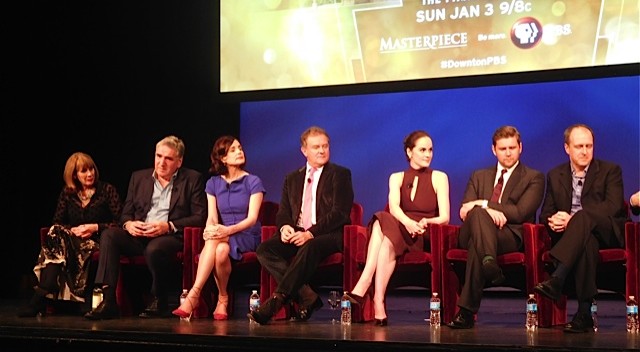 “Downton Abbey” is coming to an end. Soon the Crawleys will ring the servants’ bells for the last time. The sixth and final season begins tonight and fans all over the world are sighing and weeping. But first there are story lines to resolve.

It is 1925 at Downton Abbey. Will Edith and Mary find love? Will Mr. Carson and Mrs. Hughes find marital bliss? And will Mrs. Patmore steel herself for that sex talk with Carson that Mrs. Hughes has put her up to? (You’ll have to watch it to believe how hilarious it is.) Will the Bateses become pregnant? Will Lady Edith make a success of running a publishing company? Tom Branson has gone off to Boston, so he’s gone, or is he? In a stand off between Isobel and tart-tongued Dowager Countess (Maggie Smith) and kind-hearted Violet (Penelope Wilton) who will prevail? Will Lady Mary be given leeway to run the Crawley estate? And will Molesley find happiness, in anything?

The Downtown Abbey actors were all over Manhattan the first week of December hyping the show with some entertaining and spirited patter. Following are some tidbits from their Q&A at the Hudson Theater on West 44th Street:

Asked about his initial reaction to the script for the Downton Abbey pilot, Carter said their was one line that caught his attention: “Carson sits there in his magnificence.’ And I thought, ‘I can do that.’ You want an actor to sit in magnificence? I’m your boy!”

Hugh Bonneville on whether there was a test to see if there was chemistry between him and Elizabeth McGovern: “We had two tryouts actually. The third time we played husband and wife. So the third time’s lucky.”

Irish actor Allen Leech said of his audition, “The show was already well into filming when I auditioned for it. What was then John Branson was a Yorkshire chauffeur. I walked in all prepared, having worked for weeks on a Yorkshire accent. And they sat there and went, ‘What if you played Irish?”

Hugh Bonneville on how he realized Downton was not only a hit show but also a cultural phenomenon. “It was about four weeks in, I was in the playground picking up my son from school and a guy of his age group, age 10, came over and said, ‘I don’t mind that Thomas.’ A, I thought, what are you doing up at 9 o’clock on a Sunday evening? And B, Wow! We never expected that demographic.”

Neame said that at the 2011 Emmy Awards the show did well, picking up eight trophies. “Nobody in the theater–there was about 3000 people apparently–and nobody had a clue what the show was.”

Asked about celebrity and the show’s impact on their lives, Jim Carter said, “I can’t sit in a restaurant without somebody saying, ‘Oh it’s funny to see you sitting down.’”

The actors were asked if there was segregation of the actors? Did the aristocratic actors only hang out with each other? “We sit together don’t we Mommy?” asked Michelle Dockery, turning to Elizabeth McGovern.

Told that the romance between Mrs. Hughes and Carson was one of the delightful moments of the show, Jim Carter said, “We felt it was approaching sort of at the speed of a glacier.”

“Snail pace,” replied Phyllis Logan. Said Carter, “We didn’t rush it did we?’

There were tragedies and deaths, including the death of Michelle Dockery’s husband, played by Dan Stevens, in the 2012 finale. “It really changed the show,” said Dockery. “As much as I missed Dan when he went, I then went on to have such a fabulous storyline!”

Asked about Maggie Smith stories, Dockery said the legendary actress tosses off one-liners like she does in the show. The actress explained they have microphones that are placed on their legs under their skirts by assistants. “Our sound guy was putting the microphone on her leg, and she went, ‘Control yourself. And he just went bright red.”

McGovern said Maggie Smith hated the costumes. “They were always uncomfortable, and I remember one particular costume, which had a high, what we call a French collar. Maggie kept pulling on her collar, complaining of the heat and said, ‘Now I know why they invented the guillotine.”

Asked about wrap parties, said Dockery, “Chris Croucher, one of our wonderful producers at one point did a speech at a wrap party. It was a very emotional speech and right at the end he said, ‘Now get your dancing shoes on and party like it’s 1926.’ I think my feet have just recovered from that party.”

On what she would miss, McGovern said, “I’m going to miss regularly reiterating the plot with Hugh Bonneville in bed every night.” (The audience hooted.)

As for their favorite period of time, McGovern said, “Personally I had no fun until I ripped off the corset.”

As for Moseley, Kevin Doyle’s character, “For me between 1912 and 1926 nothing got better. Slowly, slowly worse.” Allen Leech turned and hugged him.

Gareth Neame was asked if there is a chance Downton Abbey could come back in some other way in the future? (Hint hint– a movie has been suggested…)

“It really is over,” Neame said. “Of course I realize that might often not be true of television because half the things that are on TV now are remakes of shows from 30 years ago and it suddenly occurred me when I was asked this question, this show is finished, but somebody will always own ‘Downtown Abbey,’ and long after we will retire they might pull this idea out and start it all over again.”

And for the possibility of “Downton Abbey” the movie? “Well….,” is all the producer replied.

The last question from the audience praised the show for highlighting and discussing the struggles of women and how far women have come in such a short amount of time.

“I’m actually really happy to hear you say that,” said McGovern, “because I feel that doing the show made me so grateful for the things that we do tend to take for granted today as women. At the beginning of the series Cora was in no control of any aspect of her destiny whatsoever, and playing the part for six years at times made me feel as though I was living in a straight jacket and I think it’s easy to forget and to not be grateful for the strides that women have fought for and need to continue to fight for because you know it’s not over yet. It really isn’t.”