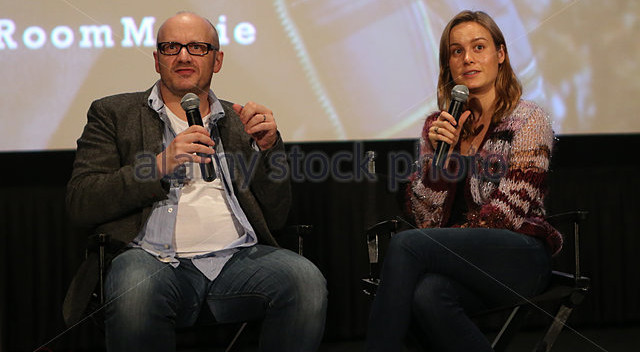 We probably haven’t talked enough about the brilliant “Room,” a suspenseful and emotional film about a mother and son locked in a tiny room for years.

“Room” has been lauded by critics to say the least, landing on most Critics Top Ten Lists, as well as the AFI’s recent top ten films of the year.  Star Brie Larson is considered a frontrunner for the Oscar for Best Actress and newcomer Jacob Tremblay has earned raves as the Best Newcomer of the year, child actor of the year, and frankly, just one of the actors of any age this year.

Emma Donoghue’s screenplay has also been included in the huzzahs. Oddly though, the talented director, Dublin based Lenny Abrahamson, has been conspicuously absent from those lists.  I talked to Lenny recently at an event that Rob Reiner hosted. Rob told the VIP crowd that, “I admire this movie so much.  There are magicians that set up huge tricks, big extravaganzas like the Taj Mahal disappearing.  The ones that impress me are the ones that have their hands right in front of my eyes and I can’t figure out what they are doing.  That’s what Lenny has done.  He’s done an expert job.”

Reiner is right, the film is indeed brilliant and daunting. I asked Lenny if that was a challenge with audiences.

Lenny answered, “From the beginning, people have told me that they were afraid to see it.  But after they do, they become evangelists of sorts and tell all their friends, ‘Don’t’ be afraid, it’s okay.” So a big part of this conversation is telling people that this film is beautiful, hopeful, emotional and life affirming. “

Maybe he succeeded too well and made it look too easy?

“The film doesn’t appear to be wrought, or made, as opposed to seeing it just happening. I filmed it with a deep cohesion and truthfulness.  The film was so tricky, unbelievably hard to make this fly and to do what it does, to get the tone right all the way through. I’m getting such positive feedback from directors  and that’s truly gratifying. One said that it’s a seamless movie, because I sewed up the many seams to make it seem that way.  So I’m grateful.”

I told him that Brie’s performance is truly magnificent, and Jacob’s is so pure.  How did he know that combination was going to be so perfect?

Lenny answered,  “You place your bets as a director on all sorts of all things.  We were about three days into in when I realized how powerful it all was.  Brie is such a generous person. Working with a kid, I’d work in a non-linear way, just to keep it fresh.  Brie would often have to find that place and jump from moment to moment.  She’s extraordinary that she was able to do that.”

What’s up next for him?

Lenny said, “I’m working on a project about the boxer Emile Griffith who was a six-time world welterweight champion in the 1950s.  He was black man from the American Virgin Islands.  He comes to New York in the late 1950’s, worked in ladies hats; he was gay and active in that scene, lived a double life.  Then became this successful boxer, it’s a fascinating story. I’m still co-writing it and will direct.”

I then asked if the plum part of Emile has been cast yet?

He smiled, “Not even close.”