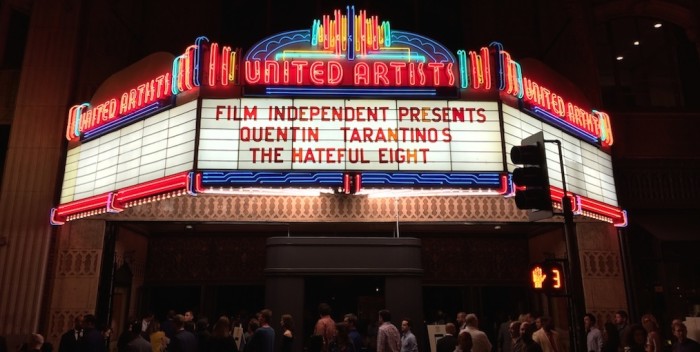 FIRST LOOK: At the holiday luncheon hosted by the Weinstein Company recently Kurt Russell talked about Quentin Tarantino’s new film “The Hateful Eight” in which he plays John “The Hangman” Ruth. (The lunch was also graced by Dame Helen Mirren, looking great in a sheath, grey fox fur collar and tiger print shoes. Her Weinstein movie this year was “Woman in Gold.”)

“It’s a straight forward Western, Sergio Leone-like Western,” Russell said. “It’s an intricate story and in the beginning you don’t know why it’s taking so long” to get started. He was talking about the first hour and forty-five minutes of “The Hateful Eight,” most of which takes place in a stagecoach hurtling through a brutal snowy Wyoming landscape.  Ruth is taking a woman in chains, Daisy Domergue, to Red Rock, through a blizzard, for $10,000 bounty and the hangman’s noose. Daisy is played by Jennifer Jason Leigh, in a welcome comeback to big movies, who was also at the lunch.

“The movie has an overture and Intermission” said Russell, who may be up for a best supporting nomination. “There are also chapter headings. “The acting’s not subtle,” he told me. He compared it to old movies adding, “It’s almost jarring sometimes,” but there’s “much more of an emotional payoff. We rehearsed for a month, so when we started shooting we were completely ready to go. You’ll see some fairly long takes. It’s one of the few movies I still remember my lines from,” he said, adding that he’d seen the film four times, “and it’s endlessly fun to watch.” He also called Ennio Morricone’s music “gripping.”

One of the first screenings of “The Hateful Eight” took place that evening at the Village East Cinema on East Second Street for BAFTA and Producer Guild of America members. The line, which snaked around the block, began forming hours before the screening.

As Russell noted, the first hour and forty-five minutes of the more than three hour long film is about the journey to Red Rock with Daisy, who he hauls off and slugs every few minutes so her face is web of blood and bruises. Along the way Ruth encounters Major Marquis Warren (Samuel L. Jackson, in an Oscar level performance), a former Union officer and Chris Mannix (Walton Goggins) a Southerner who claims to be the new Sheriff of Red Rock, and they all journey together and journey together to Minnie’s Haberdashery, a stagecoach stopover. But instead of Minnie and her staff they face four unfamiliar, tough guys played by Demian Bichir, Tim Roth, Michael Madsen and Bruce Dern. 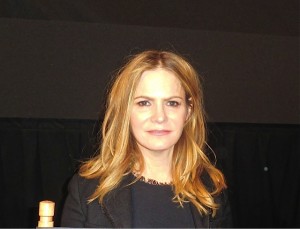 Before the action gets going there’s a 12-minute intermission. Quentin Tarantino is an omniscient narrator at one point during the story. While the movie is a Western there are also shades of “Reservoir Dogs,” since the action takes place in one place and the violence is intense. Tarantino has surpassed himself in the number of times the “N” word is thrown around.

After the screening, during the Q&A, Tarantino spoke passionately about why he wanted to make the film in 70 mm. “I’m a big proponent of film,” he said. “Not just making it but film projection and I thought it would work well with the movie. But basically I thought, well, if I get Weinstein to pay to shoot it in 70 [mm] than they’re going to be committed to having it be shown in 70. So we are committing one way or another to those screens, and I’m all down with that.”

Tarantino compared it to a big roadshow and that the Weinsteins were committed to finding theaters with the right projection equipment. Eventually found about 100 screens they could show the film on, including the Village East Cinema. The idea, said Tarantino, “was to treat it like we take over, more like we’re Billy Joel coming to town for a concert and you’re retrofitting the theater for a concert.”

There was a reading of the script to an invited audience more than a year earlier. Jennifer Jason Leigh said she was in the audience. “It was an incredible night in the theater to hear this piece read,” she said “Quentin read all the stage directions, hilarious and really stressful and intense. It was a night you never will forget. I didn’t think there was a prayer I would be in it. I just loved the experience of watching it.”

“It was like wow Quentin’s doing something that hasn’t been done before he’s putting his material out there in this way and let’s just celebrate it,”  Goggins said “It was raucous, it was like a Shakespearean production, like once in a lifetime, this is it…and it’ll never be repeated.”

Tarantino said even after the reading, “It’s not money in the bank…I have to go through it…you can’t just look at the script and say this is going to be a movie…there is an adaption process that is going to happen,” he said. “If we could have done this at a little 99 seat theater at the Bowery…if we did it at the Brooks Atkinson Theater [a Broadway house] it would be really go…but the point ..we had  confidence in the material so thus I could..before we shot it I could talk about the technical engagements and how it was going to show but normally I wouldn’t have that kind of chutzpah to talk about the end result before it had actually gone through the process.but it was kind of there, it was kind of there on the page.”

“One of things there was some speculation, at least on the Internet, where people were saying, ‘we really appreciate that he’s doing this but it’s a set bound piece. Isn’t that a waste of 70mm?’ But that’s just working from the idea that 70mm is only meant to shoot the Sahara dessert or mountain ranges. And I actually think it can be a very intimate format and I mean, I mean I shot a lot of movies with Samuel Jackson. I’ve never seen his eyes the way I see them in the close ups in this film.”