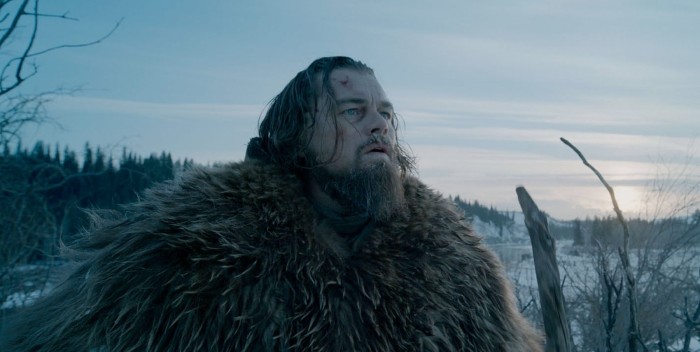 Advance screenings of Alejandro Gonzalez Innaritu’s epic “The Revenant,” starring Leonardo DiCaprio, are producing all kinds of reactions, all wildly favorable, albeit with caveats.

The Fox movie, based on Michael Punke’s “novel of revenge,” takes place near Yellowstone, Montana, in 1823. It begins with the same bloody incident that launches the book– the gruesome attack by a grizzly bear on trapper Hugh Glass. Innaritu has taken essentially the following sections of Punke’s book and enlarged them into a feasting by animal on man. The bear flips Glass over on his belly and molests him– dry humps him actually– as he nearly devours him. How Innaritu and DiCaprio did this is a movie mystery because it is as real feeling as Bruce the shark in “Jaws” 40 years ago. It’s as real looking as it could be, and maybe the most frightening moment I’ve seen in a film in eons.

You can see a little bit of the frightening bear attack in this trailer:

Here’s the passage from Punke’s book. Nothing is spared in the filming:

The grizzly dropped to all fours and was on him. Glass rolled into a ball, desperate to protect his face and chest. She bit into the back of his neck and lifted him off the ground, shaking him so hard that Glass wondered if his spine might snap. He felt the crunch of her teeth striking the bone of his shoulder blade. Claws raked repeatedly through the flesh of his back and scalp. He screamed in agony. She dropped him, then sank her teeth deep into his thigh and shook him again, lifting him and throwing him to the ground with such force that he lay stunned— conscious, but unable to resist any further. He lay on his back staring up. …

Then Glass is found after the attack by Harris, one of the trappers:
…he had never seen human carnage like this, fresh in the wake of attack. Glass was shredded from head to foot. His scalp lay dangling to one side, and it took Harris an instant to recognize the components that made up his face. Worst was his throat. The grizzly’s claws had cut three deep and distinct tracks, beginning at the shoulder and passing straight across his neck.

Another inch and the claws would have severed Glass’s jugular. As it was, they had laid open his throat, slicing through muscle and exposing his gullet. The claws had also cut the trachea, and Harris watched, horrified, as a large bubble formed in the blood that seeped from the wound. It was the first clear sign that Glass was alive. Harris rolled Glass gently on his side to inspect his back. Nothing remained of his cotton shirt. Blood oozed from deep puncture wounds at his neck and shoulder.

His right arm flopped unnaturally. From the middle of his back to his waist, the bear’s raking claws left deep, parallel cuts. It reminded Harris of tree trunks he had seen where bears mark their territory, only these marks were etched in flesh instead of wood. On the back of Glass’s thigh, blood seeped through his buckskin breeches. Harris had no idea where to begin….

It’s not the only shocking moment in “The Revenant.” Later in the movie– and the novel– Glass (DiCaprio) comes upon a dead horse, removes its insides, takes off his clothes and climbs inside the carcass for warmth during a storm. If you’ve already survived the bear scene, this is the coup de grace.

And what will Fox do with two potential Best Picture nominees with lead actors and directors in direct competition? They already have a huge box office crowd pleaser with an Oscar performance by Matt Damon in “The Martian.” Every studio should have these problems! They’re almost un-bearable!