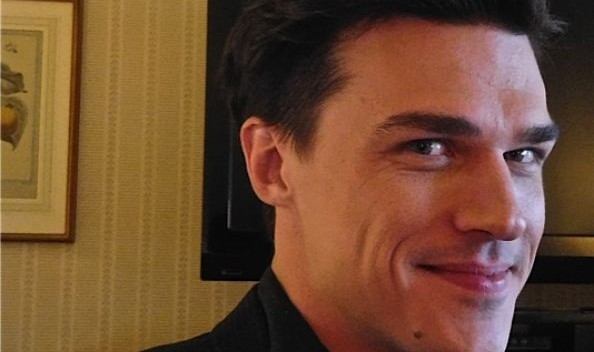 Finn Wittrock– yes you’ve seen him before. He started on “All My Children,” the soap, then made a big leap to Mike Nichols’ production of “Death of a Salesman.” He was stranded at sea with Louis Zapata in Angelina Jolie’s “Unbroken.” Right now he’s on TV playing against Lady Gaga in “American Horror Story:Hotel.” He’s also in Angelo Pizzo’s “My All-American,” and is featured in Adam McKay’s “The Big Short,” coming in a couple of weeks.

“My All American” is based on the true-life story of Freddie Steinmark, the University of Texas football legend, who died in 1971 at age 22. Aaron Eckhart co-stars as iconic coach Darrell Royal who offered Freddie a scholarship and a spot on the team despite his small size and build.

The movie has made $2.2 million since its release November 13th as an indie feature.

The role of the clean-cut, religious Freddie Steinmark is miles away from Wittrock’s best known role as the hypersexual, psychopathic character, Tristan Duffy, in “American Horror Story: Hotel” seduced by the Countess, played by Lady Gaga.

At a press conference recently to promote the film, I asked Finn what it was like working with Lady Gaga.  He told me, “Gaga’s awesome! She’s a real workhorse. That’s something many people don’t know. She’ll be in New York accepting some award on the weekends and then on set at 7 am and you would never have known that she’d gone anywhere…I think she did a lot to break the mystique about her, by the way. Like she hangs out with the crew, she talks to them, she sings songs on set. She’s very, very approachable.”

With Tristan Duffy, the demented male model in plays in “Hotel,” Wittrock told me, “I decided to just that he was like even though it’s modern I decided that he was like Sid Vicious. He’s like a punk guy from the 80’s. I just immersed myself in the Sex Pistols and when punk was starting and listened to that music every day so you create you a history if there isn’t one already.”

So what’s going to happen to his twisted model character? “I really don’t what to tell you because you’re going to be really shocked. I can say that I have a cool transformation this year, which is something I’ve never done before.”

I asked Pizzo, the first-time director, who wrote the screenplay for the beloved sports films, “Hoosiers” and “Rudy,” if he cast Wittrock against type in “My All American” after seeing him in the gory and demented FX series? It turns out Pizzo never saw the popular Ryan Murphy show.

Despite Freddie Steinmark’s untimely death, he was so optimistic and goodhearted that the movie remains upbeat and inspirational. Freddie was also religious and went to mass every morning. The film, which is a weepie, should also appeal to school kids and church groups.

(I saw a nun at the press junket, which was a first. She told me she reviews inspirational films for her religious website.)

Playing someone as perfect as Freddie presented its own challenges Wittrock told me. Former team mates of the athlete would tell him, “Yeah, he was the best guy I ever knew. He’s like a perfect person.’ It’s like, oh, good, I’ll just do that. That’s why, whenever people started saying, ‘He’s such a good person,’ I would go, ‘Like, no, stop, please, stop talking,” Wittrock said. “I wanted to find out what’s underneath that.”

To prepare for the role, Wittrock, who never played football before, took an immersive football boot camp and ended up doing many of the stunts himself.

“I’m like his size, so when you see guys twice your size coming after you full force you realize how daunting it is and how much mind over matter it has to be to know that you’re five ten and can take down a guy that’s 6’5,” 250 pounds, and he did. And that’s what they said. These guys were like, ‘I didn’t even know what hit me and then all of a sudden I was on the ground and this little runt was hopping away.”

Asked about Austin he said he fell in love with the city just being there two months. “There is still a hippie vibe lurking around the corner,” he said. “That’s the difference between me and Freddie. It’s like he was the clean-cut sort who harkens back to the 50’s All American, you know? I probably would have been the long-haired hippie smoking weed in the corner.”