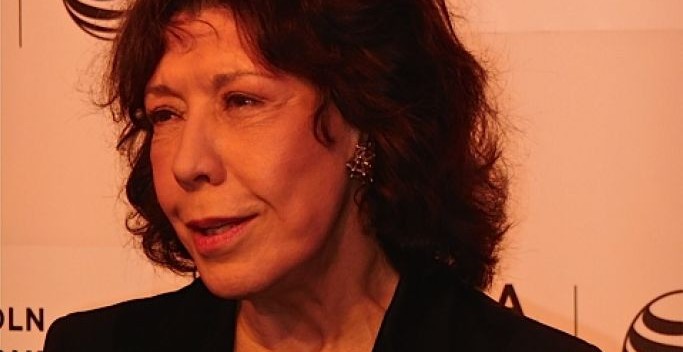 Lily Tomlin and I are sitting across from the bar in the shabby-chic Marlton Hotel on West 8th Street, and it looks like the sort of place where David Lynch would film a movie with a lot of silences. There are no midgets or teenage marching bands, but the way it’s been decorated—with red leather banquettes and dark lighting in the afternoon—makes us expect something odd to happen.

But the sound that fills the bar, I hear on my tape later, is Lily’s laugh. It’s hearty, and full of fun. No one laughs better than Lily Tomlin. “Do you want something?” I ask her. “Do you want some tea?”
She looks at me as if I’ve suggested we take off in a rocket ship. Her eyes grow wide with delight. Actually, they twinkle.

“Okay,” she says tentatively. “I could do that.”

We are here to discuss Grandma, the Paul Weitz film that caused a sensation in January at the Sundance Film Festival. This isn’t a movie with a Jurassic World budget. Grandma cost just $600,000 and was shot in 19 days. It’s one of the most profitable films ever, earning $6.8 million since it opened in August.

Lily used her own car, a 1955 Dodge Royal Lancer, her own clothes, her own ideas. Her character, Ellie Reed, is an outspoken hippie, a fringe person or what is now considered an “outsider,” just right for Tomlin, with her army of characters.

“She’s my age,” Tomlin says of Ellie, “she’s a feminist, a lesbian. I understood it.”

She understood the role so well that now she’s the most buzzed- about actress queuing up for this year’s Oscar race. She’s on every list of contenders along with Bree Larson, Cate Blanchett, Jennifer Lawrence, Kate Winslet, et al. (Academy voters should really watch this DVD this weekend.)

Tomlin has never won an Academy Award. She was nominated for Best Supporting Actress in 1975 for her first film, Robert Altman’s Nashville. There have been a string of great performances since then—in The Late Show, The Incredible Shrinking Woman, All of Me, 9 to 5, Short Cuts, and so on—but nothing to bring her back to the realm of Oscar hopeful.
Would she be disappointed if she didn’t get an Oscar nomination this time? “A little bit,” she says. “I hope Sam gets one. He’s so good.” Sam is Sam Elliott, known for westerns and rough- and- tumble films, and the voice of car truck commercials as well being the husband of Katharine Ross. He’s having a little Renaissance himself this year after appearing in “I’ll See You in My Dreams” with Blythe Danner.

With an Oscar, she would achieve an EGOT.

“I have two Peabodys. So I’m going to change it and call it PEGOT!”

She also has a Kennedy Center honor, bestowed this past winter. She’s the only member of the cast of the beloved NBC comedy Laugh In—which also produced Oscar winner Goldie Hawn and comic talents like Ruth Buzzi, Henry Gibson, and JoAnn Worley—to receive one.

At the actual Kennedy Center ceremony at the White House, an odd moment was caught on tape. While President Obama is praising Tomlin, in particular her famous 1973 sketch with Richard Pryor called “Juke and Opal,” Tomlin got up and whispered something in the president’s ear. They each laughed.

What did you say to President Obama, I ask Lily?

She gives me a toothy Cheshire cat smile. “I’m not telling you! Nothing.” She laughs. “I was sitting right next to him. I don’t know what I said. You’ll have to get my lips read. It wasn’t very exciting.” Her interruption was pure Lily; you’d think they were old friends. “I was surprised I stood up in an instant. I’d never met him.”

It was Laugh In―produced by George Schlatter and hosted by Dan Rowan and Dick Martin―that turned Lily into a household name overnight in 1969. The show was already two years old. But when Tomlin debuted Ernestine, the fusty, provocative telephone operator with a macramé hair snood, a snort, and great, Rockette-like kicking legs, she became a star. Ernestine’s trademark introduction entered the lexicon: One ringy dingy, two ringy dingys, have I reached the party to whom I am speaking?

The rest, as they say, really was history. When Ernestine hit, Tomlin says she was unprepared. The show was on hiatus. She was on tour with Rowan & Martin doing standup as part of their live variety show.
“Dan was very dignified, Dick was a goofball,” she recalls. “Johnny Brown, who was on Laugh In, was also on the show. We’d each do twenty minutes. Then there was an intermission and a comedy act called Stills and Isles, or Isles and Cavanaugh, or something like that did the second half.”

The Ernestine routine made the crowd sit up and take notice. “Dan and Dick would introduce me, and the crowd would roar.”

In her second season, Tomlin created Edith Ann, the 6-year-old who sat in a humungous rocking chair and dispensed adult wisdom. She uttered her famous tag line was “And that’s the truth” with a raspberry lisp.

“They weren’t going to let me do Edith Ann. They thought she was bratty,” Lily says. “They let her go on and she caught on overnight.” She’d been doing another character, Susie Sorority, an ironic cheerleader. “I traded Susie Sorority for her. I didn’t even have the chair. I wanted George to build me a chair. When they finally built it for me I was so gratified. It’s in my living room now.”

How big is it?

“It’s quite large. You can hike yourself up on the seat if you’re really nimble.”
What color is it? “Well it was yellow. We painted it white to go with our house. It’s to make Edith look like a 6-year-old.”

The “we” includes her partner since 1971, Jane Wagner, the low-key comic genius who’s written or co-written most of Tomlin’s material for the last 45 years, including her hit Broadway show Search for Signs of Intelligent Life in the Universe. They married in 2012. Wagner is the love of her life.

“Jane Wagner is so adorable. She shies away from the spotlight. It’s so painful because I get credit for everything,” Lily says. But in 2012, the two of them got a special award in Palm Springs. The ceremony can been seen on YouTube, where Wagner makes a rare—and hilarious—appearance. “She’s so funny,” Lily says.

“It brings tears to my eyes that you like her, because I want her to be acknowledged so badly.”
Tomlin says she will write a memoir only if Wagner will do it with her. Lily says: “I thought of having the characters tell my story, like Mrs. Beasley and Tommy Velour. I’d only do it if we could do in an interesting way with Jane writing half the book.” She adds. “My half would be illiterate.”

Her book would also include long friendships with Jane Fonda and Dolly Parton, her co-stars from 9 to 5, a movie from 1980. The three have rarely been out of touch, but last year Fonda and Tomlin reunited to shoot the hit Netflix comedy Grace and Frankie, which yielded Lily an Emmy nomination for Best Actress in a Comedy.

Lily: “I didn’t like that I got nominated and Jane didn’t. I wasn’t so happy. She was wonderful about it. She’s so insecure about the show. She doesn’t think she’s funny. But I said there’s no Frankie without Grace and no Grace without Frankie.”

Tomlin and Fonda have just finished filming a second season for Netflix, which this year adds the very same Sam Elliott as Fonda’s love interest. Tomlin will not say who hers is, although Ernie Hudson is coming back from Season One. “We think it’s a little better this year,” she says earnestly.

She’d like to do the show, which also stars Martin Sheen and Sam Waterston, forever.

“As Jane says,” Lily laughs, “I hope that we do this long enough that we are in diapers!”
At this point, anything is possible. I tell Lily that it’s fairly unusual to have unflagging popularity for 45 years. She’s never been out of fashion.
She jumps in: “Because I’ve never been like―” She struggles to fill in the blank. Tom Cruise? Julia Roberts? “I was never spectacular!”
I say, “Oh yes you were.”
“I was, but not because of a movie. I was never a movie star,” she says, with some satisfaction. “I was always a co-star.”

(PS Thanks to Joan Jedell and Hamptons Sheet magazine, where this was first published in August 2015.)