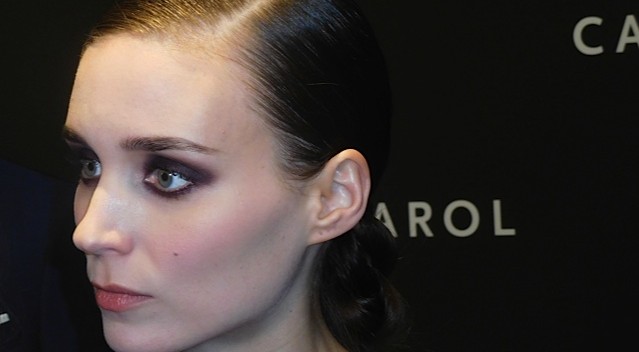 Todd Haynes’ Oscar-buzzed 1950s lesbian romance film, “Carol,” premiered last night at the Museum of Modern Art. The whole cast, except Cate Blanchett, headed over to a swanky party at the Four Seasons afterwards, with special guests like Zosia Mamet, Holland Taylor, and playwright Suzan Lori Park. Blanchett, tired from doing more press than a presidential candidate, went back to her hotel to be with her newly adopted baby.

Rooney Mara’s guests included her parents Chris and Kathleen Mara, of the NY Giants dynasty Mara’s. Yes, they have two movie star daughters–Kate is in “The Martian” right now.

Chris Mara told us, proudly: “Each of them works hard, and directors know that. They come ready to work.”

The stunning and very soft spoken Rooney told our Roger Friedman she expects to be in the sequel to “The Girl with the Dragon Tattoo.” Daniel Craig, as well? “I don’t know,” she said. “I’m just trying to keep track of this movie!” Rooney, by the way, doesn’t follow football much even though she’s named for her mother’s father, football coach Dan Rooney.

On the red carpet Blanchett towered over Rooney as they posed for photographs. Blanchett wore a mustard-colored gown by Lavin with cutout panels in the back and side and underneath what looked like a pink corset.

She told journalists that all the characters in “Carol” were in the same dilemma and victims of society and the roles they felt foisted on them to play.

On the red carpet, I spoke to Todd Haynes about his upcoming film, “Wonderstuck,” based on the children’s novel by Brian Selznick, the author of “The Invention Of Hugo Cabret,” that was made into a movie by Martin Scorsese. Julianne Moore will star in “Wonderstruck,” is set in the 1920’s and 70’s and marks the fourth time they’ve worked together.

In an awkward segue, I asked the director about the women’s sex scene and if there were any challenges. “I don’t know if I can characterize it as a challenge exclusive to lesbian sex and love. I really think that when people are intimate with each other there’s all kinds of roles that get played,” he said. “I think when it’s a gay couple they can swap different kind of dominant and passive roles maybe more freely. But that’s also true for heterosexuals,” he said.

Whether it’s shooting a gay or straight sex scene it’s the same he said. “You just want everybody to feel as free and supported as possible, so we all we know what we’re doing and why we’re doing it, where the camera is, what the emotion and the mood of the sex is, why it’s in the film to begin with, and what nudity is involved? When people know all those things, they feel an element of trust that’s really important.”