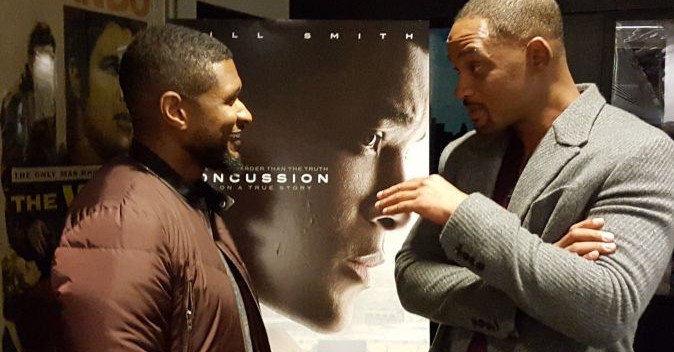 updated Will Smith is back. It’s been a while. After a dearth of hits that included such bombs as “After Earth,” “Focus” and “Seven Pounds,” as well as a cameo in the terrible “Winter’s Tale.”

But “Concussion” is the Will Smith from “Pursuit of Happyness” and then some. He affects a convincing educated Nigerian accent as Dr. Bennet Omalu, the pathologist who figured out that repeated head injuries in the NFL lead to mental illness, suicide, and other horrors. Omalu was ostracized and vilified by the NFL, but Peter Landesman’s excellent docudrama will make him a hero to those who’ve guessed for a long time that something was wrong in professional football. Smith brings his A game and is back in the Oscar race.

“Concussion” takes on the NFL in a big way. So how did the producers get the rights to NFL logos, footage, images? The answer: they didn’t. “Sony did a remarkable thing. They got righteous and aggressive said, God dammit, If they want to sue us they can. If they sued that would be a good story in itself,” says Landesman. “We got to show how beautiful the game is. We want people to walk out [and think about football] it’s beautiful and it will kill you.”

(Using the logos probably falls under fair use, but I like the bravado!)

Will was a guest last night a private screening of “Concussion,” the first since it debuted at the AFI fest a few days in Los Angeles, and first on the East Coast. No one in the NFL has seen the film yet, and when they do, they are not going to be sending Champagne to Sony Pictures. The league comes off as insensitive and clueless, as does their $35 million a year CEO Roger Goodell.

But at last we get some idea about the heartbreaking deaths of pro football players like Mike Webster, who is played exquisitely by David Morse. I hope Morse gets enough attention to earn some Supporting Actor nods; his portrayal of the Pittsburgh Steelers player is so pungent it hovers over the film even after he’s gone.

Some of the guests last night at the Sony screening room and later for a seated dinner at the Sony Club included Morse and fellow cast mate Hill Harper, R&B/pop star Usher and his lovely wife Grace, actor Malik Yoba, Will’s son Jaden Smith, MSNBC’s Lawrence O’Donnell, actress Leven Rambin and new husband actor Jim Parrack, and director (“Lone Survivor”) Peter Berg, who moderated a short Q&A. I asked Will if he was still a Philadelphia Eagles fan– he is– and whether he’ll be nervous walking into an NFL stadium now. “I’m deeply conflicted about it,” he said with a laugh.

Here’s the thing about Will Smith: in person he is the nicest guy, very much like Tom Hanks. He’s accessible and unpretentious. I’ve always said this. We chatted about wife Jada, and the supermarket tabloid stories of their long-not happening divorce. He laughed at that, too. He has a very open laugh and response, too. It’s very hearty. Why did he do the film? “To get at the truth,” he said, “and to play Bennet Omalu.”

Also at the dinner was Will’s dad, Will Smith Sr., whom Will Jr. praised during the Q&A as an American success story who owned his business. I asked Mr. Smith after dinner which of his son’s movies was his favorite? His answer surprised me.

“Six Degrees of Separation,” he said of the John Guare drama. Why’s that, I asked? “When he went to the first table read, Will didn’t have to open the script. He knew all his lines already,” said Mr. Smith.

Photo c2015 Showbiz411 by Roger Friedman on a Lumix point and shoot.