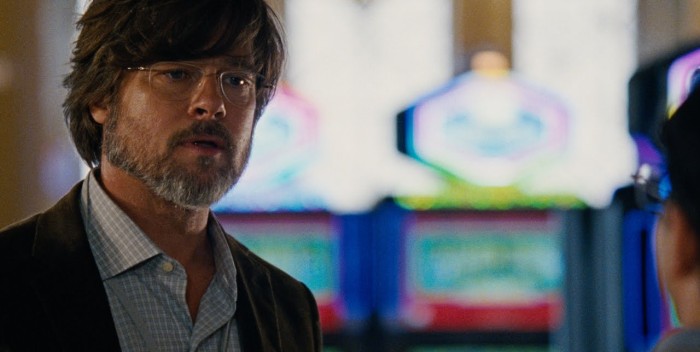 Could “The Big Short” come up huge this awards season? That’s what the seasoned crowd thought last night at the closing night of the AFI’s Film Fest in Hollywood last night.  AFI’s President and CEO Bob Gazzale was accepting kudos from the VIPS all night for this year’s successful festival.

What a way to go out, with “The Big Short,” adapted from Michael Lewis’s best seller, “The Big Short: Inside the Doomsday Machine,” which was centered on the housing credit bubble of the 2000s.  It’s directed by Will Ferrell’s favorite guy, Adam McKay,  with a star studded cast including Steve Carell, Ryan Gosling, Christian Bale, Brad Pitt, Melissa Leo, Marisa Tomei, Hamish Linklater, (who was escorted by his talented actress girlfriend Lily Rabe).

To make a long story Short: “Short” is a story about an insanely complicated topic which is scathing, and exhausting, but always fascinating to watch.  The actors play a bunch of  soon to be mega rich social misfits, some who have moral compasses and some who sadly don’t.  I asked McKay how he got involved.  “I loved the book. I had an idea of how I wanted to do it.  I called Michael, we had lunch and that was it.  He’s a great guy.”

Michael Lewis then said, “Adam had me at hello. I’ve seen all of his movies and am a fan. The whole trick to making this work is to be funny about it at the same time. He has the chops to do it.”

I asked McKay if Bernie Sanders, who has been preaching about bank fraud for years, has seen it.  “I’m not sure, but every politician should see it. Right wing or left wing they all should see it. They all like to pretend that it didn’t happen.  Bernie Sanders has been one of the loudest about bank reform.  So he’s already there when it comes to this movie.  But the rest of them, where were they when this was happening?”

Some of the stars chatted before the screening, with the exception of Brad Pitt, who is in Dubai shooting a new film. Pitt’s Plan B films produced the movie.  Ryan Gosling,– who was celebrating his birthday so he didn’t go to the after party– said, “It was kind of like we were all cramming for a test.  As soon as it was over, we forgot everything.”  Why did he want to do it?  Gosling answered, “There’s nothing like this movie, it’s the most socially relevant one I’ve ever done.”

Steve Carell joked about the complicated subject matter.  “I actually have to be paid to be in character to actually rattle off these terms. Really though, it was actually like going to school and learning a foreign language.  I went in to just try and learn about this world and the guy I was playing.”  Carell could once again be a potential best actor nominee, as he was for “Foxcatcher.” The other actors will most probably jockey for best supporting nods.  So bottom line,  what does Steve hope for this film?  Carell answered,  “I hope it starts conversation, and that people learn how dire the situation was and still is frankly. “

“The Big Short” opens in limited release on Dec. 15th.