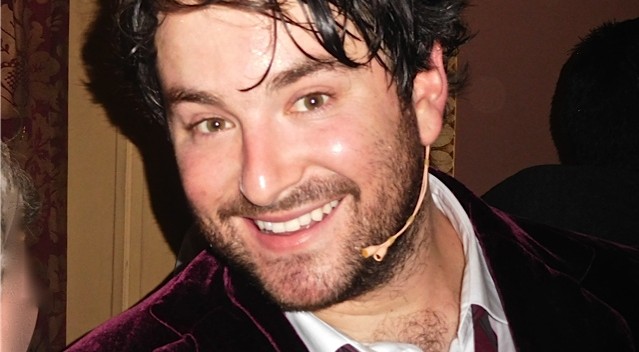 from Paula Schwartz:
I happened to be at the first preview of School of Rock. I bought my own ticket. The publicist had a photo op and I got a quick photo of the Alex Brightman, who plays Jack Black’s role of Dewey Finn. I didn’t realize until I spoke to Andrew Lloyd Webber – yes he was there and introduced the show to the audience telling them they were at the world premiere – that all the kids play their own instruments. The musical doesn’t open until Dec. 9 but it’s already very polished and could open tomorrow. The rock is loud, the kids are amazing and it should bring a lot of young fans to the theater.

Brightman has all of Jack Black’s manic energy and runs around the stage for almost the entire 2 1/2 hours of the show. I hear someone backstage say that after the first act they literally wring out his shirt and a bucket of sweat comes out. I believe it.

This is Brightman right after the show.

Webber is very invested in the show. It’s strange to think of him involved in this since he’s most associated with “Phantom of the Opera” and “Cats,” but the music has lots of electric guitar which recalls “Jesus Christ Superstar.”

Most curious of all that Julian Fellowes of “Downton Abbey” wrote the book, with lyrics by Glenn Slater.