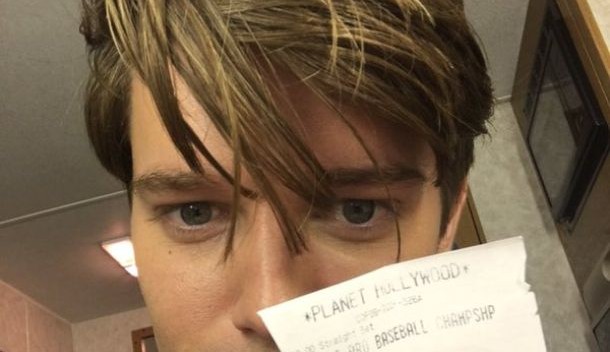 Patrick Schwarzenegger, 22 year old son of Arnold S. and Maria Shriver, uses his mom’s last name on Twitter. (Everyone loves Maria.) But for his fledgling movie career, Patrick will be son of the Terminator, a name that’s very useful for worldwide sales. So “Midnight Sun,” just filming now with Bella Thorne, has already made a sale to a German distributor sight unseen. The brand goes on.

Can he act? Does it matter? Young S is being served up as next year’s tabloid kid, featured in a bunch of straight to DVD things (except for Connolly’s movie, which I’m curious to see). The question will be, is he serious? Will he wind up in “Terminator” remakes or go for something more? Remember, the Shriver in him will make him more serious minded. Could be interesting.

The Kennedy in him doesn’t hurt, either. On Twitter, Patrick advertised last night that he bet on Kansas City to win the World Series back in May.

Made the bet for the royals to win it all on May 25th. Pretty cool. pic.twitter.com/vWFmaICpbc